What is QLED? If you’re on the market for a new television, it’s likely you’ll have seen the QLED moniker plastered over boxes, banners, and product pages. But if you aren’t in the know, Samsung’s high-end QLED TV technology might sound baffling – and we’re here to set you straight on what to expect from QLED, and how it differs from other panels technologies like OLED and LCD.

Essentially, QLED is a proprietary panel technology developed by Samsung for its top-tier televisions. By using a metallic quantum dot filter, QLED panels enhance color and contrast, boosting the capabilities of HDR and 4K images compared to other non-quantum dot LCD-LEDs.

There’s a little more to it than that (QLED TV models now include Samsung’s Bixby virtual assistant and a nifty Ambient Mode to help them blend into your room better) but what you just read is the crux of what makes a QLED a QLED.

It isn’t quite a revolution in TV displays, but it does offer a high visual standard beyond the realm of regular LCD televisions.

There are more QLED TVs than ever in Samsung’s 2020 TV range, even if the competition from rival panel technologies – OLED, for one – remains stiff.

Here we’ll cover everything you need to know about QLED, how it compared to basic LCD-LED TVs, and whether a QLED TV is worth investing in.

Since we first wrote this guide, a number of new QLED TVs from Samsung have entered the market. Once you’ve familiarized yourself with the ins and outs of QLED, read our hands-on reviews of the Samsung Q950TS 8K AI QLED , the Samsung Q6FN QLED TV (QN65Q6FN) and the Samsung 55-inch 8K QLED. 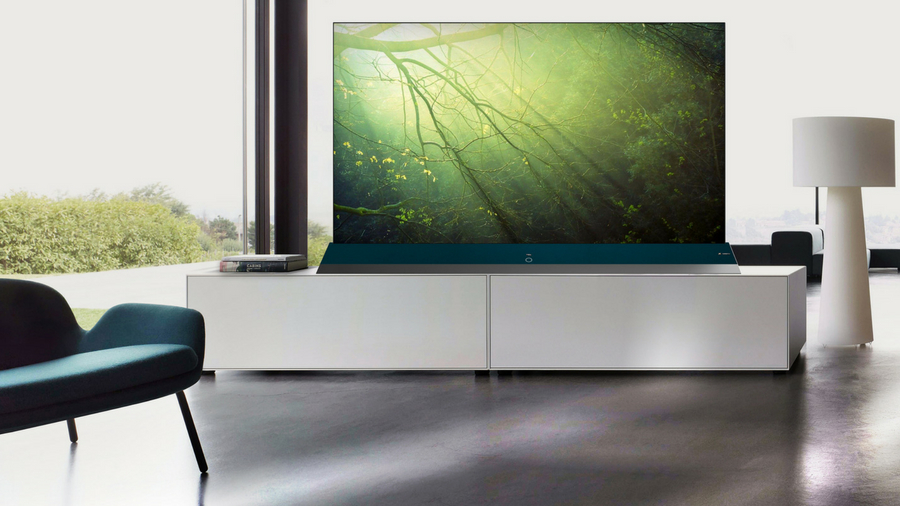 Honestly? It’s a bit of an enigma. Literally QLED means – or we suppose it means – quantum dot light-emitting diode. (That’s not to be confused with OLED, which refers to ‘organic light emitting diode’, and is a competing display technology we won’t go into detail on here.)

So what is a quantum dot light-emitting diode – or QLED – display, compared to a regular LCD television?

This Samsung-baked concept is basically just the latest set of enhancements to the same quantum dot technology that the company has been working on for the past few years.

Technically speaking, Samsung’s QLED TVs are not QLED at all, well, at least in the way that we understand the term. A ‘proper’ quantum light-emitting diode element emits its own light – the clue is in the name – whereas Samsung’s latest TVs use a separate LCD backlight (and an edge-lit backlight, at that) just like any other LED-LCD TV. So where the QLED moniker comes from, we’re not sure. 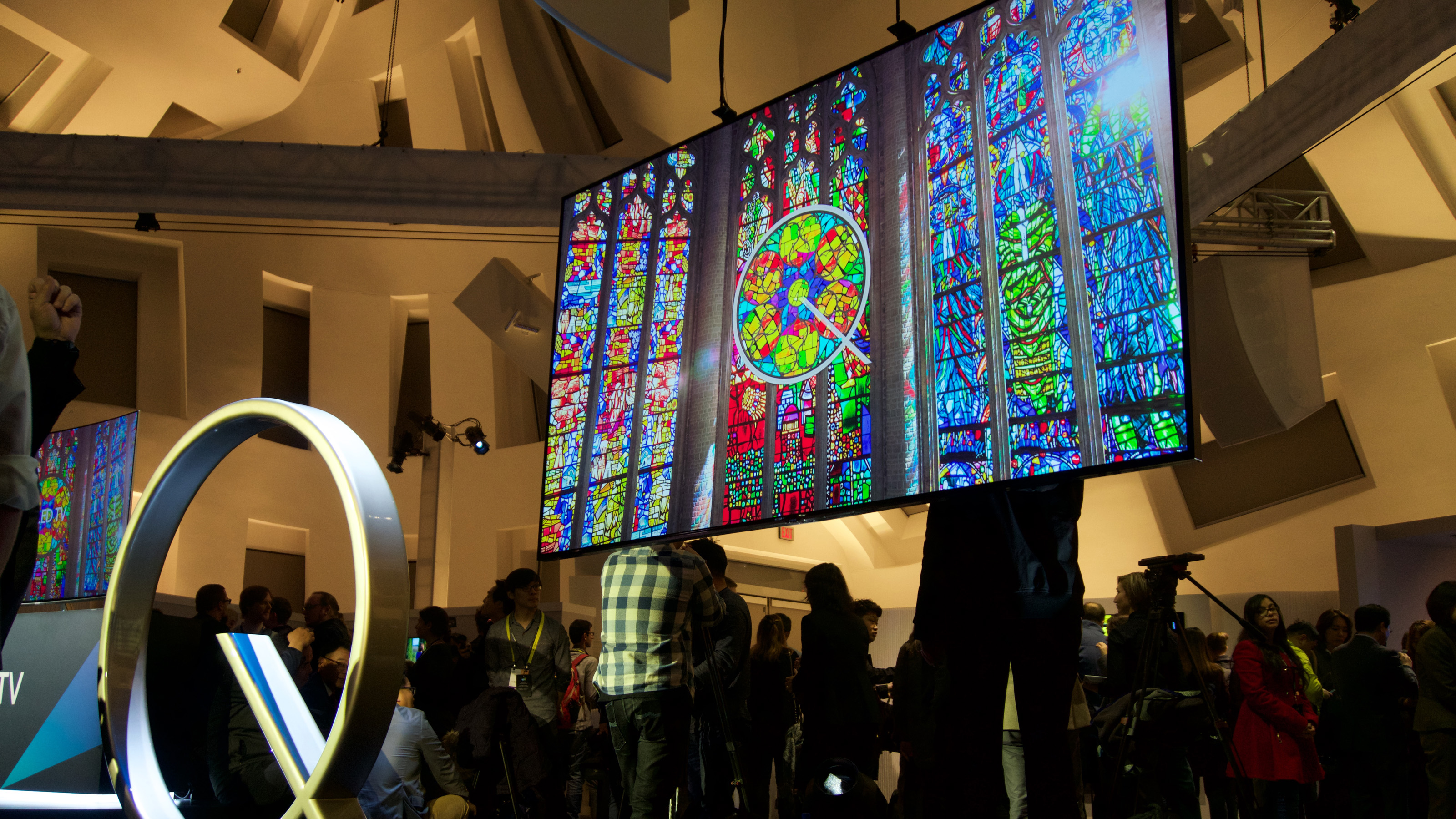 How does a QLED TV work?

It’s complicated, but hang in there with us. So, to start, all QLED TVs have a quantum dot filter. This year, there’s a new refined aluminum compound that help make the dots more efficient (and therefore brighter) and more effective at passing pass light through, which creates wider and more accurate color.

So what is a quantum dot filter exactly? It’s a film of tiny crystal semi-conductor particles that can be precisely controlled for their color output, which replace the red, green and blue color filters that old TVs used.

Samsung says that its QLED TVs use the new filters to display 100% coverage of the DCI/P3 color space (read: much deeper black levels and sparkling HDR), and maintain that performance whatever the brightness.

They’re so bright, in fact, that Samsung’s QLED TVs can manage anywhere between 1500 nits to 2000 nits brightness. Considering 1000 nits is needed to produce HDR, that’s proper bright, though exactly how anyone could stand the glare of 2000 nits, we’re not sure. Sunglasses, anyone?

While the advances in brightness are intriguing, Samsung claims that the new QLED TVs have a newly designed pixel panel structure to allow better off-axis viewing. For a living room environment, that could be QLED’s big selling point.

Beyond the ‘paradigm shift’ hyperbole of Samsung’s marketing, it’s really important to understand that QLED isn’t really anything new at all. In fact, it’s really nothing more than the latest – possibly among the last technically possible – tweaks to existing LED-LCD technology that’s dominated big screen TVs for the last decade.

QLED’s innovations – deeper blacks, better colors and wider viewing angles – tackle three traditional problems of LED and LCD technology, but they’re the same problems that are addressed year in, year out by TV makers. Only upcoming reviews will reveal if, in fact, QLED is a significant step forward from traditional LED-LCD screens – but chances are good that we’ll see some real improvements in these areas with Samsung’s new sets.

Perhaps a more important comparison is QLED vs OLED. The latter uses pixels that emit their own light, but OLED displays are manufactured only by Samsung’s arch-rival LG, and now used by Sony, Philips and Panasonic, too.

There’s no doubt that QLED, for now, has an advantage in terms of brightness (so in theory may better handle HDR content – though might just as easily overcook it), but if you’re looking for a ‘paradigm shift’ in picture quality and the next-gen display technology, OLED is still the frontrunner. The latter uses individually lit pixels to achieve better contrast ratio and richer blacks that LED-LCD will never be able to hit, quantum dot filter or no. You can see the best of the bunch in our best OLED TVs roundup too.

What happened to SUHD?

QLED and SUHD are essentially the same thing; the new messaging is more about marketing than technology, although the jump from 1000 nits on the top-end SUHD TVs to 1,500 to 2,000 nits on the flagship QLED TVs is perhaps more revolutionary than it seems at first.

Put simply, for a buying public still getting to grips with what UHD is, SUHD just proved too confusing, so Samsung has dropped it. (It also probably didn’t help that the ‘S’ in SUHD didn’t really mean anything… although we’re not convinced that QLED is much clearer.)

Should I buy a QLED TV?

Samsung’s QLED TVs are claimed to be all about the brightest possible, most accurate coloured images pictures, which therefore work with all kinds of content in all kinds of lighting conditions.

To an extent, those claims are true. The developments Samsung has made in recent years in improving QLED panels have made for some incredible high-end televisions, such as 2019’s Samsung Q90 QLED. And Samsung’s been sensible about using QLED as a by-word for premium hardware as well as brilliant picture quality.

That all seems a decent package for the living room, but whether you should buy a QLED TV will ultimately come down to price. You’re still paying thousands for a good QLED television, and the longevity of QLED may lie in how successfully Samsung can bring the technology to more mid-sized budgets. For now though, QLED offers a bright picture of what’s to come.

Jamie Carter made original contributions to this article.