Finding the best drone for you isn’t easy, particularly with new registration schemes and laws adding to the buying confusion. At the same time, there’s never been a better time to buy a flying camera – whether you’re a beginner or a professional looking to shoot some fantastic aerial photos and video, the latest drones combine great image quality, ease of use and unprecedented value for money.

This is where we come in. We’ve spent countless hours testing a wide range of these aerial movie makers, and you can see the results in our buying guide below. Right now, the best drone for most people is the DJI Mavic 2 Pro. Though if you need something a bit more affordable that also doesn’t need to be registered, then the DJI Mavic Mini is also a great choice.

Of course, there are a number of other options if you don’t want to shell out on a DJI drone – that’s why we created this best drones 2020 buying guide, to sort the best drones for sale, from professional aerial companions to kid-friendly models. 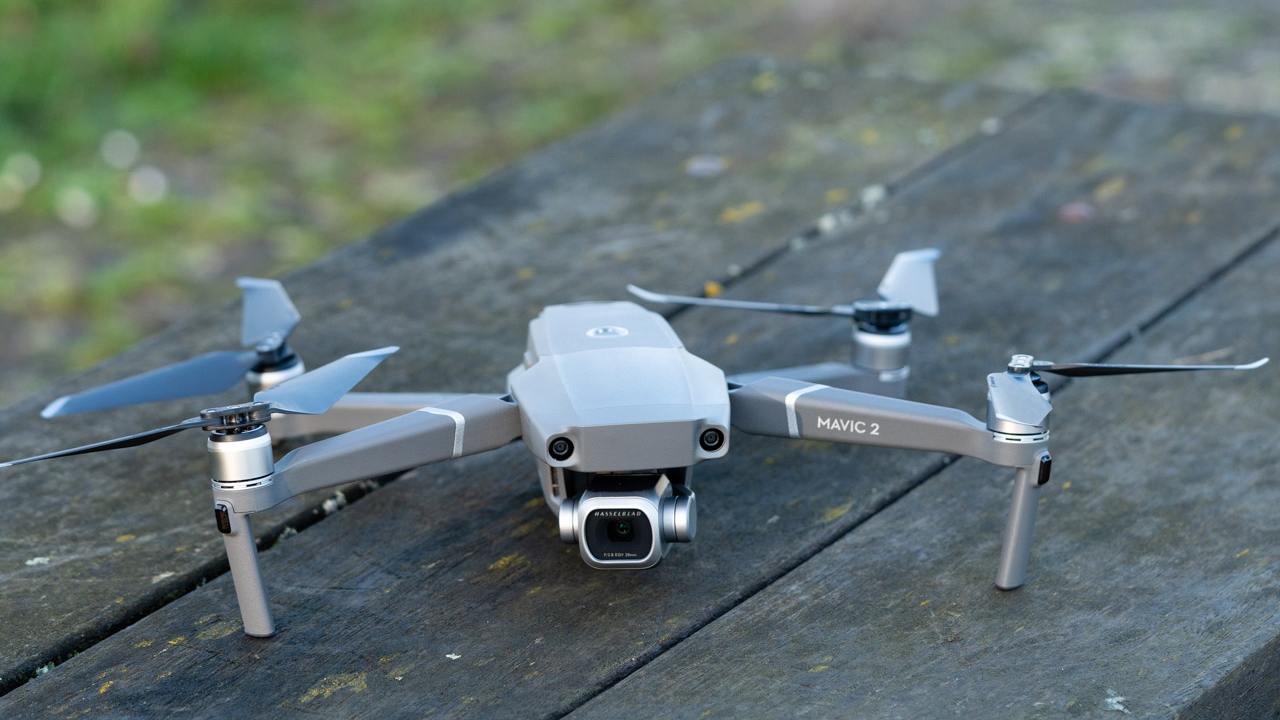 The DJI Mavic 2 Pro remains the best drone for most people for a few reasons – it has a large sensor, it’s a joy to fly, and the foldable design makes it portable and travel-friendly. If you need zoom or serious portability, then the Mavic 2 Zoom and Mavic Mini are worth investigating. But otherwise, this is the best all-rounder in the skies. Its 20MP one-inch sensor is capable of shooting Raw stills and 4K video at 30fps, while the aperture is adjustable between f/2.8 and f/11, which means less need for ND filters. What’s more, despite its impressive skill set, the Mavic 2 Pro is easy to fly and intuitive to control using its partner app, while a range of intelligent shooting and flight modes make capturing cinematic shots a cinch. It also offers some of the most advanced flight and camera tech currently available, making it capable of delivering pro-grade images, yet still accessible even for beginners. Provided you don’t need optical zoom, this is pretty much the perfect drone for most people. 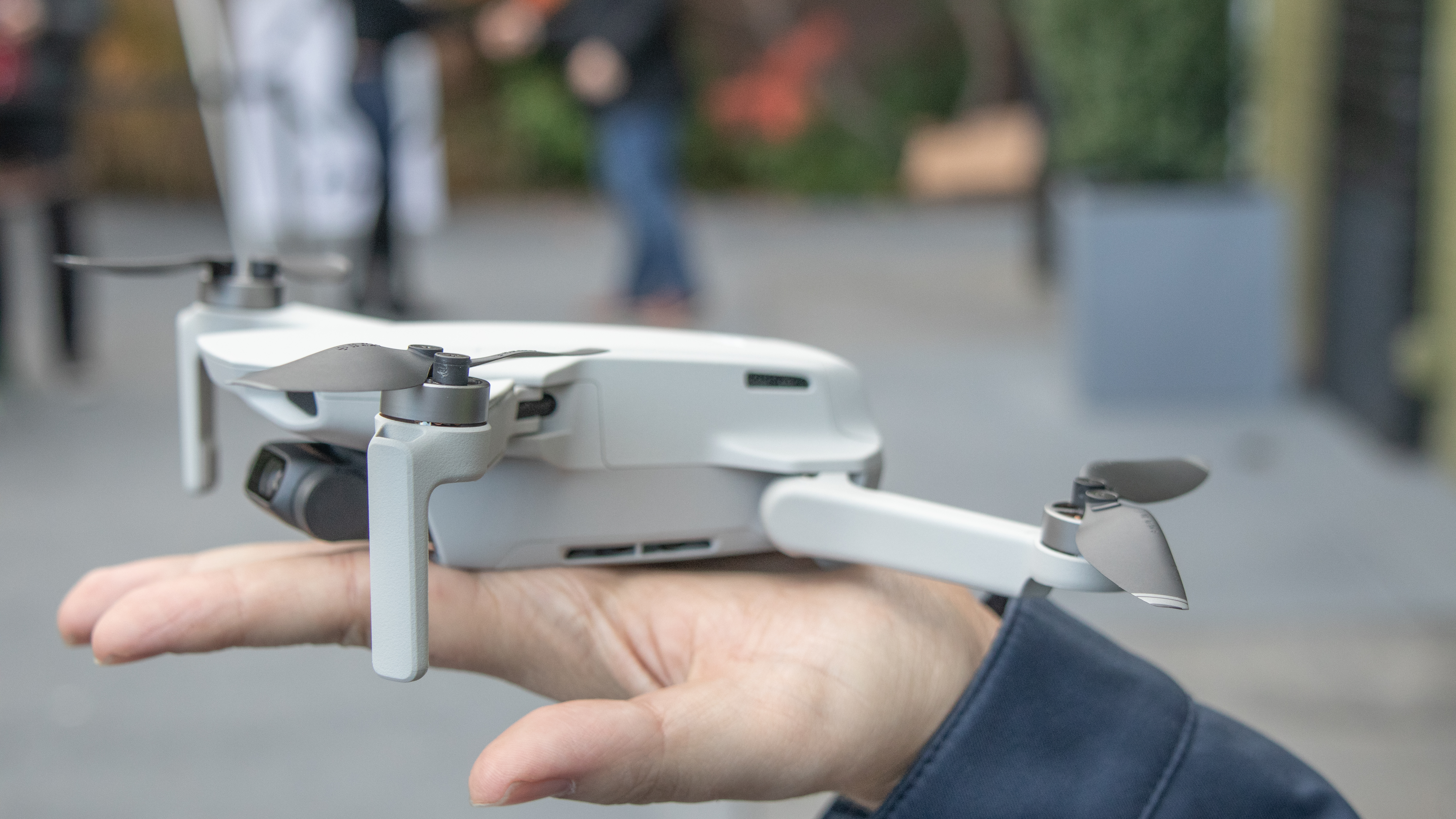 The DJI Mavic Mini is a perfectly timed masterstroke on DJI’s part. It tackles drone law changes across the US and UK head-on, while also delivering great video quality in a premium, compact body.

Laws now state that drones weighing over 250g need to be registered with aviation authorities – the FAA in the US and Civil Aviation Authority in the UK – and before the Mavic Mini launched, there weren’t any well-reviewed options in this featherweight category. Which means that, right now, DJI has secured itself a monopoly in the sub-250g premium drone market because, unlike one of its main rivals, the Parrot Anafi, that weighs around 300g, the Mavic Mini doesn’t need to be registered.

It isn’t quite our dream drone as the absence of 4K, or 2.6K 60fps video recording is felt, but the DJI Mavic Mini is still in a league of its own, pairing a compact, light body with a robust flying experience and decent-quality video capture. 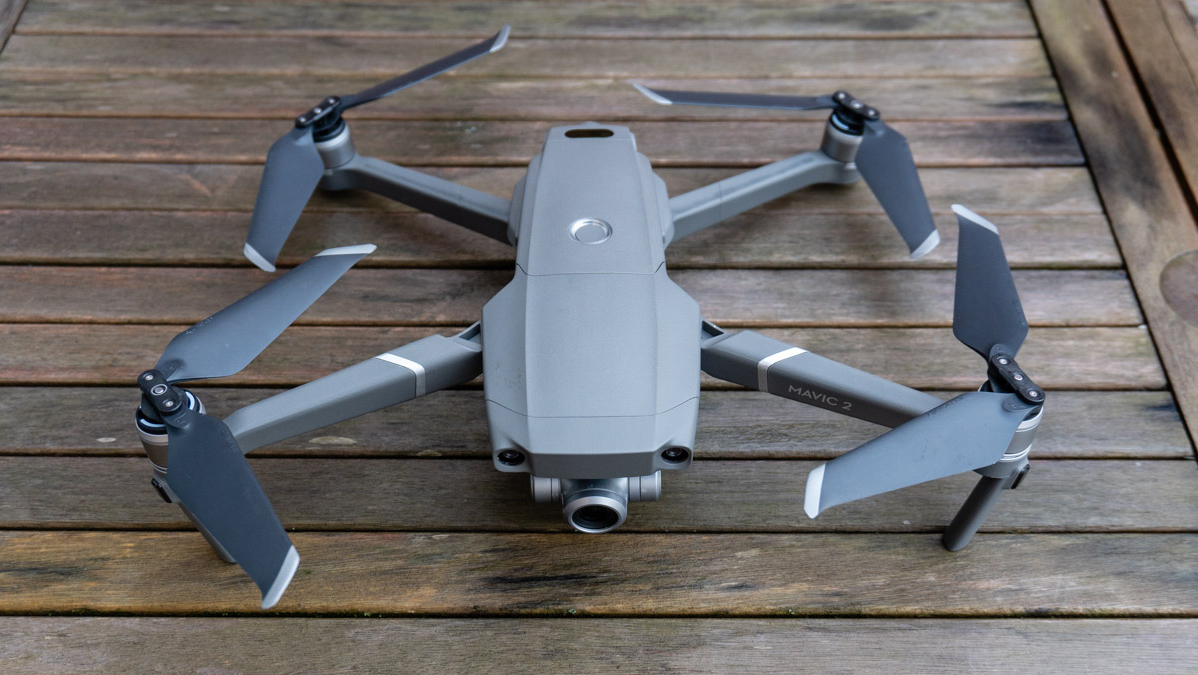 The DJI Mavic 2 Zoom is largely identical to the Mavic 2 Pro, apart from one crucial difference – its camera system. While both drones are incredibly portable, sharing the same lightweight foldable design, and offer a range of high-spec features, the Zoom pairs a smaller 12MP sensor with an 24-48mm optical zoom lens. That means you can capture close-up shots of subjects like people, while still maintaining the safe and legal distance of 50m. Because of the smaller sensor, image quality doesn’t quite match the Mavic 2 Pro and the f/2.8 aperture is fixed, but photos and videos are still more than good enough for professional use. The real boon is that zoom lens, which unlocks a world of creative shooting potential. Range is good, distortion minimal and control is intuitive via the partner app. On top of that, you get all of the intelligent flight modes you’d expect from a DJI drone, including Active Track and Hyperlapse, as well as a decent 30-minute flight time. If you want a drone with zoom, this is the one for you. 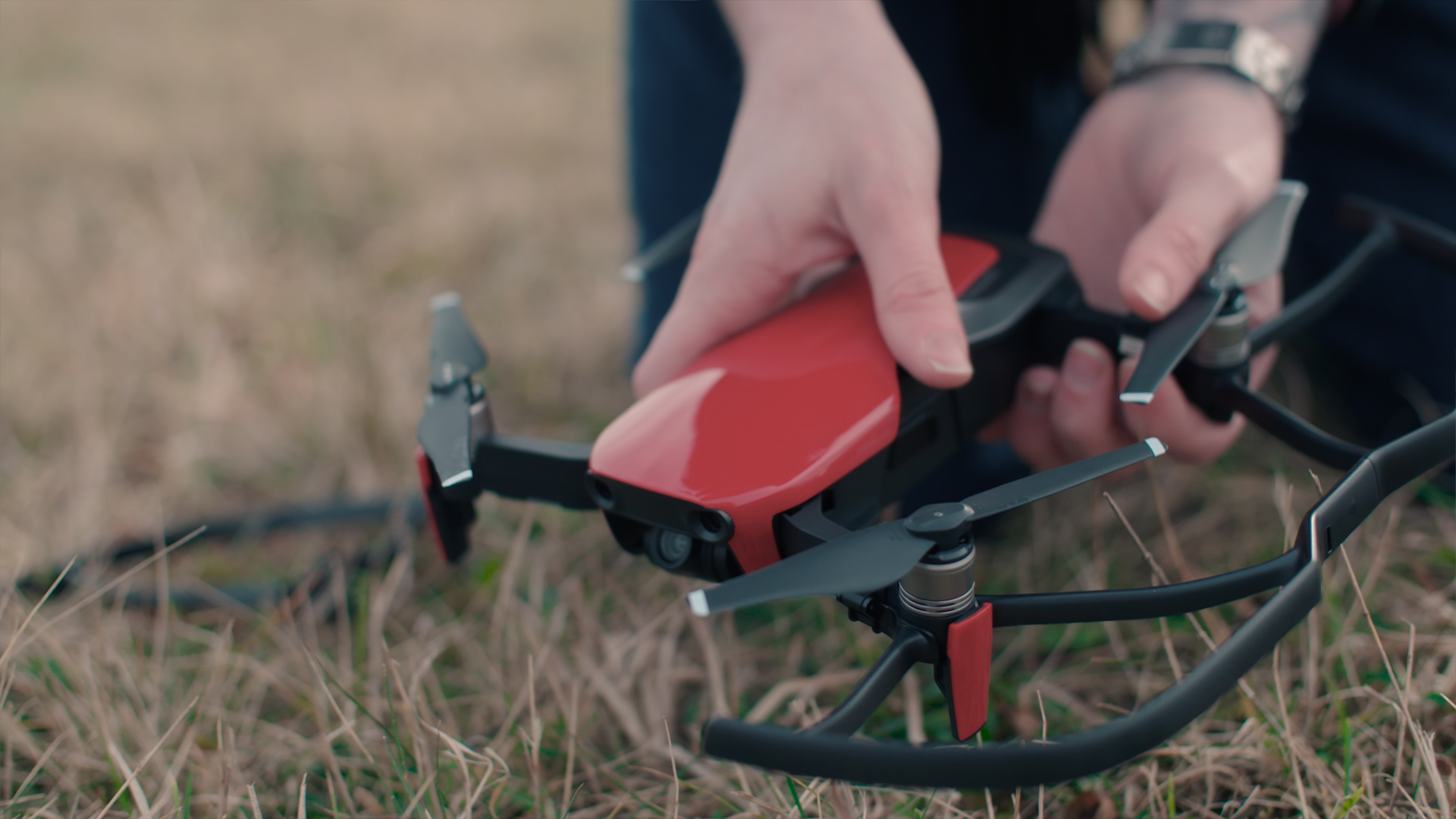 Despite coming out in early 2018, the DJI Mavic Air remains a fantastic 4K drone for beginners and travelers, thanks to its mix of portability and power. If you need something that sits in between the Mavic Mini and Mavic 2 Pro, then it hits that sweet spot – and offers much better value now it’s price has dropped.

The Mavic Air can record steady 4K video at 60 frames per second, yet fit into a backpack or even a jacket pocket. There aren’t many compromises either if you’re okay with 21-minute battery life (typical for drones of this size). Our tests proves its true flight time can be as little as 18 minutes once you get up and running, so we’d recommend getting the Fly More Bundle, which includes three batteries.

The Mavic Air is small, fast and can do a lot of neat tricks. It can track moving subjects, boomerang around them on a pre-coordinated path, and take spherical video as if it’s crashing down to earth to capture your ultimate drone selfie. While you will need to register it in the UK and US due to its 430g weight (something the Mavic Mini neatly sidesteps), it is more powerful than the latter is most areas, including speed, obstacle avoidance and image quality. 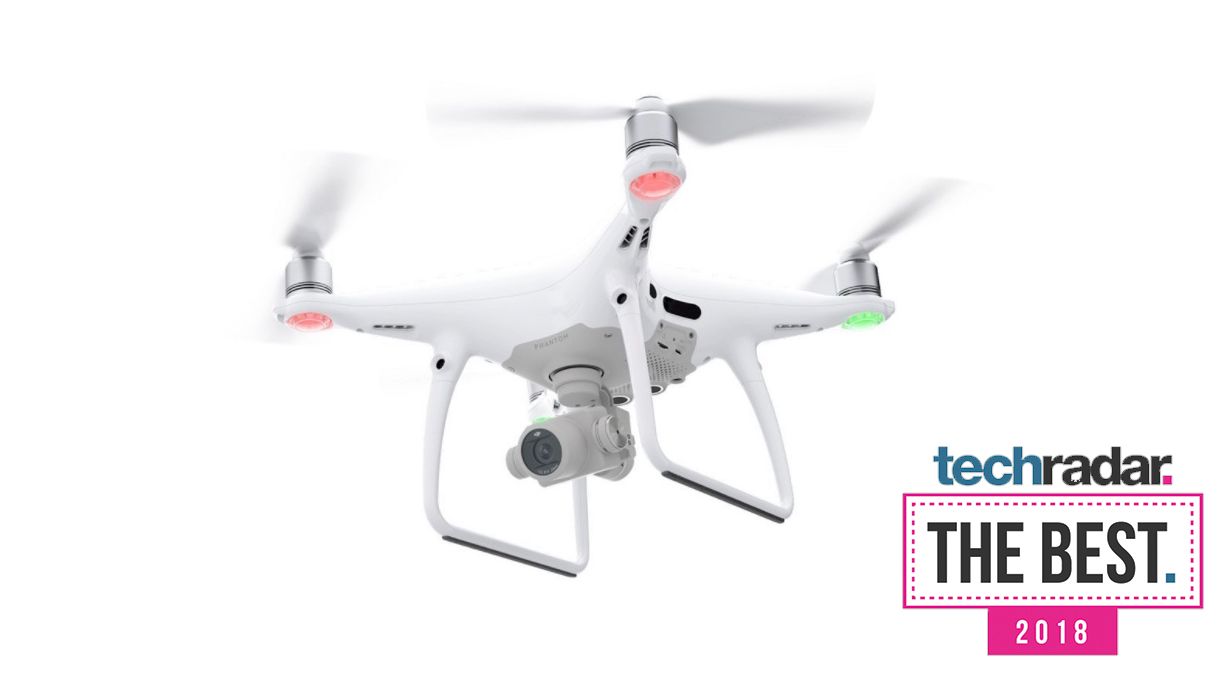 A refinement of the already impressive DJI Phantom 3 Professional, the Phantom 4 brings with it a more sturdy construction, updated object-avoidance technology and – like so many of DJI’s offerings – an excellent dedicated remote control which connects to an equally feature-rich smartphone app.

4K video recording is supported, and the gimbal design means you get rock-steady footage even when the drone is moving at speed and changing direction. The biggest downer – and you’ll notice this is a common complaint with many commercial drones – is battery life, which is only around 15 to 20 minutes, depending on how hard you’re pushing the drone.

While it’s not quite in the same league as its Inspire 1 sibling, the Phantom 4 offers a similar degree of performance and functionality for a lower price, making it an excellent option for budding aerial photographers rather than experienced professionals. 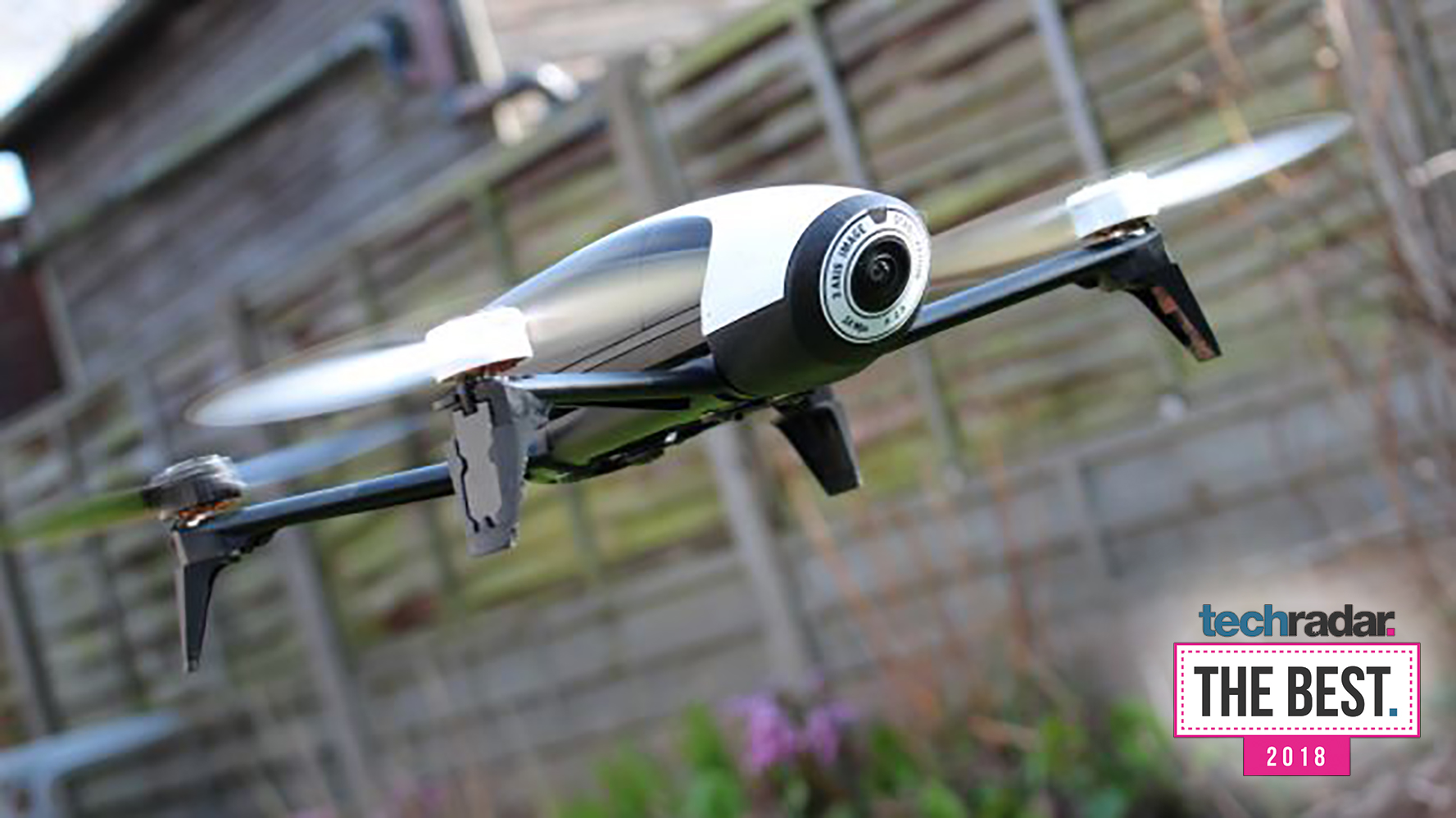 The Bebop 2 is a mid-range offering which won’t break the bank yet offers a surprising amount of features for the price. The camera utilises a fisheye lens, and stabilization software removes the need for a gimbal; combined with the intelligent construction of the chassis, which uses rubber dampeners to reduce vibration in-flight, this results in video footage that’s refreshingly judder-free.

If you’re feeling especially flush you can take the Bebop 2 to the next level by purchasing the optional flight controller and FPV headset. The former connects to your smartphone and offers proper flight controls, while the latter uses your phone’s screen to present a first-person view of what the Bebop 2 is actually seeing. It’s initially quite jarring to fly the device in this fashion, but after a while you’ll wish all drones came with such an accessory.

On the downside, Parrot has locked away some of the Bebop 2’s more interesting features, such as route planning and ‘follow me’ functionality, behind a paywall, which means the cost increases further if you want to use these. Battery life is also somewhat disappointing, so it may be worth investing in a spare power cell. 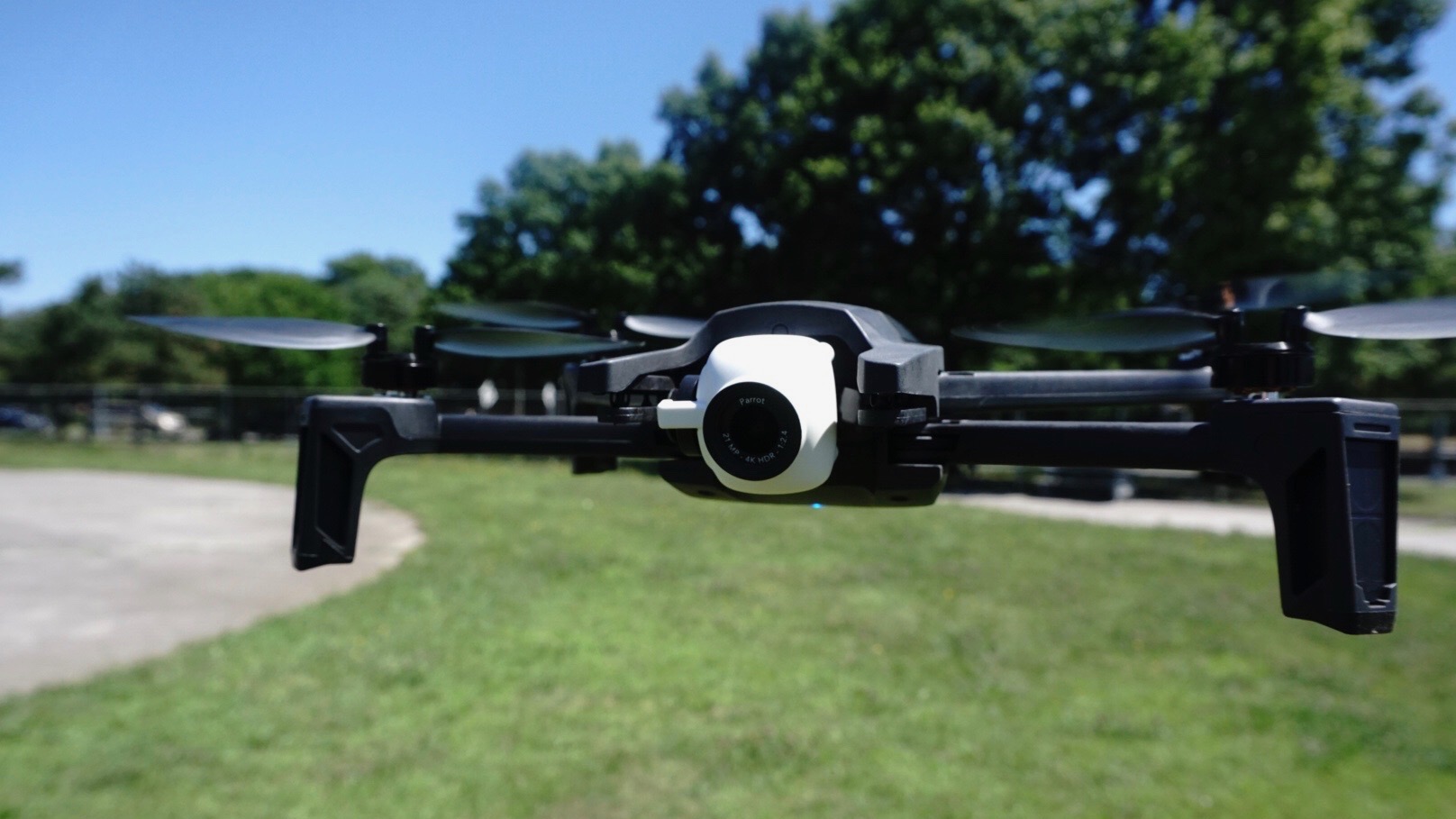 This lightweight, bug-like drone might be small, but its photography chops are among the most impressive around.

Its camera has 180 degrees of vertical range, which enables it to take photos directly upwards – a feat no other drone can match. It also has a 2.8x zoomable lens with no image quality reduction.

The Parrot Anafi is a particularly good choice for selfie fans. Its Follow Me mode tracks your movements, adjusting automatically for more photogenic angles, and its SmartDronies modes – Orbit, Parabola, Boomerang and Tornado – cause the drone to fly around you in various circles and arcs.

The main drawback is the Parrot Anafi’s lack of obstacle avoidance, which makes it hard to recommend to new users. It’s also a shame that a couple of flight modes are locked away as extra in-app purchases after you’ve paid for the drone. 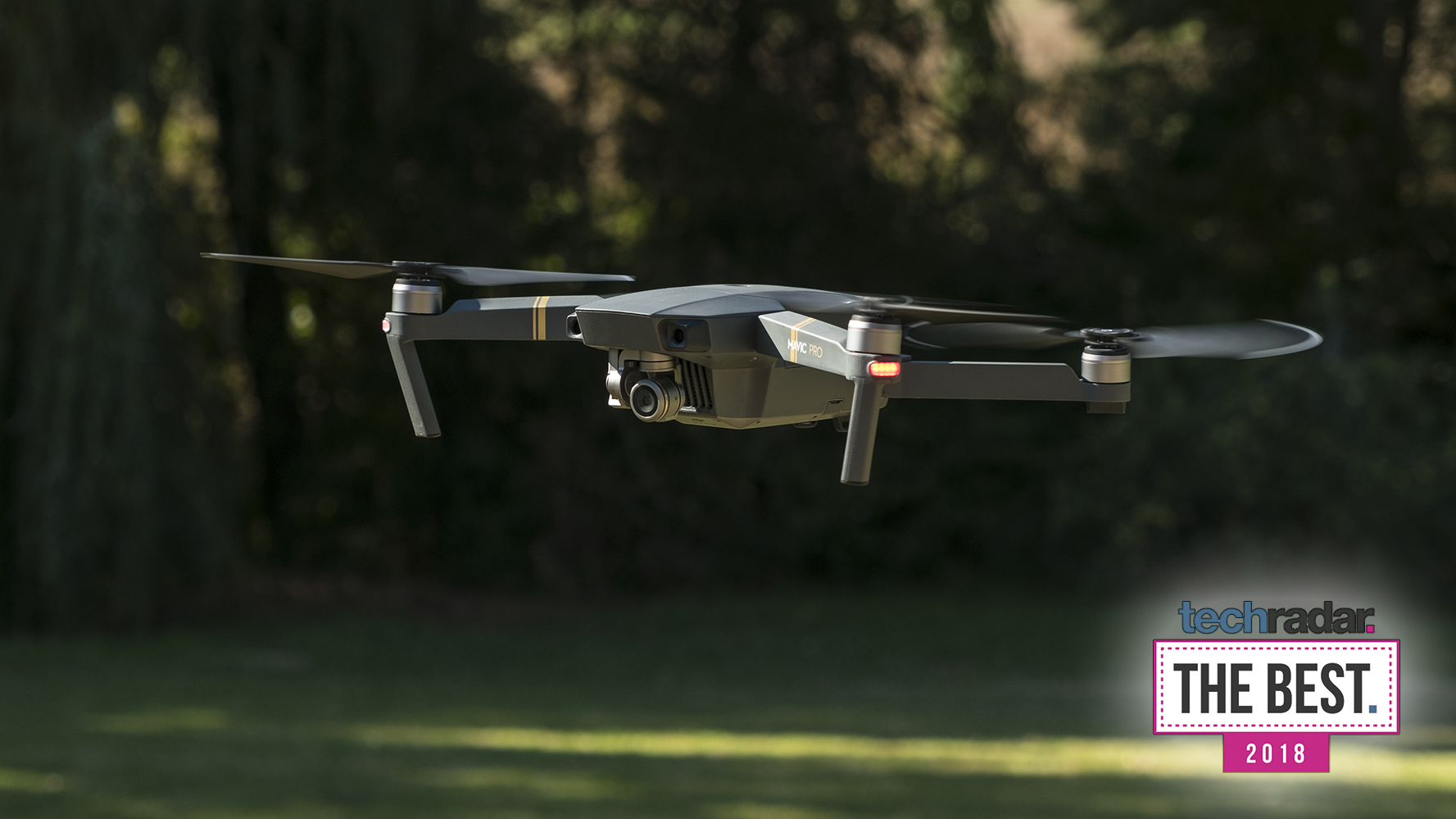 It’s now been superseded by the DJI Mavic 2 Pro (see above), but this is still one of the best consumer drones around – and now it’s more affordable too. Until the DJI Spark came along, the Mavic Pro was the smallest drone in DJI’s lineup. Don’t let its diminutive size fool you though – this pint-sized flyer boasts the kind of performance that DJI’s larger drones are famous for.

The camera is mounted on a gimbal, which is unusual for drones of this size. It delivers fantastic results with both photos and video in good lighting, although the small size of the sensor means low-light shooting can sometimes be tricky. The Mavic Pro has a top speed of around 40 mph, so it’s no slouch in that department, and the battery is good for around 20 to 25 minutes of aerial action.

As is the case with other DJI drones, the Mavic Pro comes with a dedicated remote control that uses your phone’s display to show you exactly what the device is seeing. Range is quoted as being over four miles, giving you the opportunity to capture some amazing stills and video without worrying about the connection dropping. 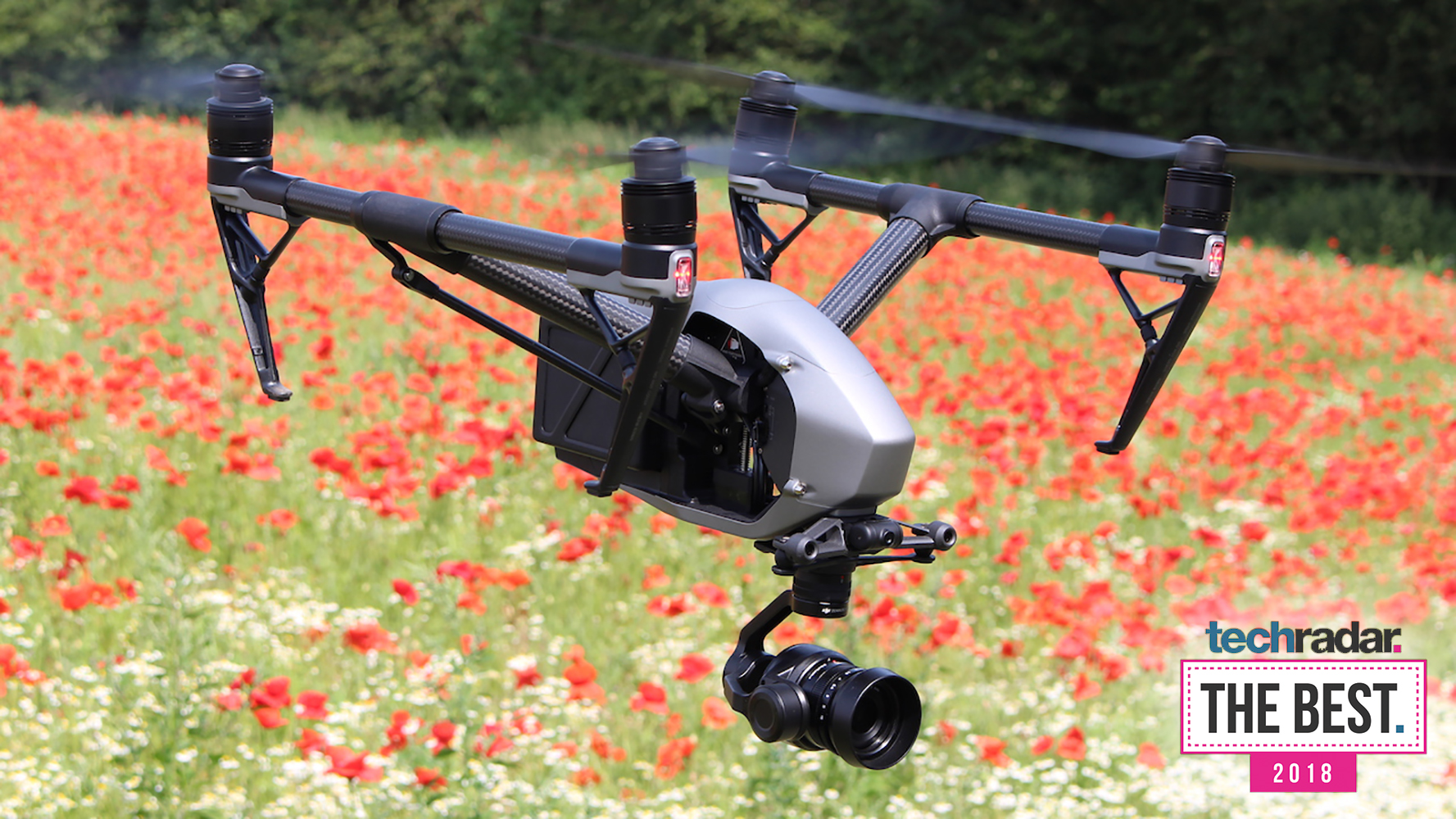 Soundly knocking its predecessor off the top spot is the highly impressive Inspire 2. With a sleek metal composite bodywork upgrade, it’s a much more attractive piece of kit. What’s more, with more advanced object avoidance technology you don’t have to worry about that beautiful body getting scratched by you accidentally clipping a tree.

You get more than 25 minutes of flight time out of the twin-battery arrangement, and the ability to swap camera lenses means that professional photographers and videographers have complete control over their images and 5K video.

The fully-featured smartphone app and dedicated remote control make this drone incredibly easy to control, but make no mistake, this is a professional piece of kit. 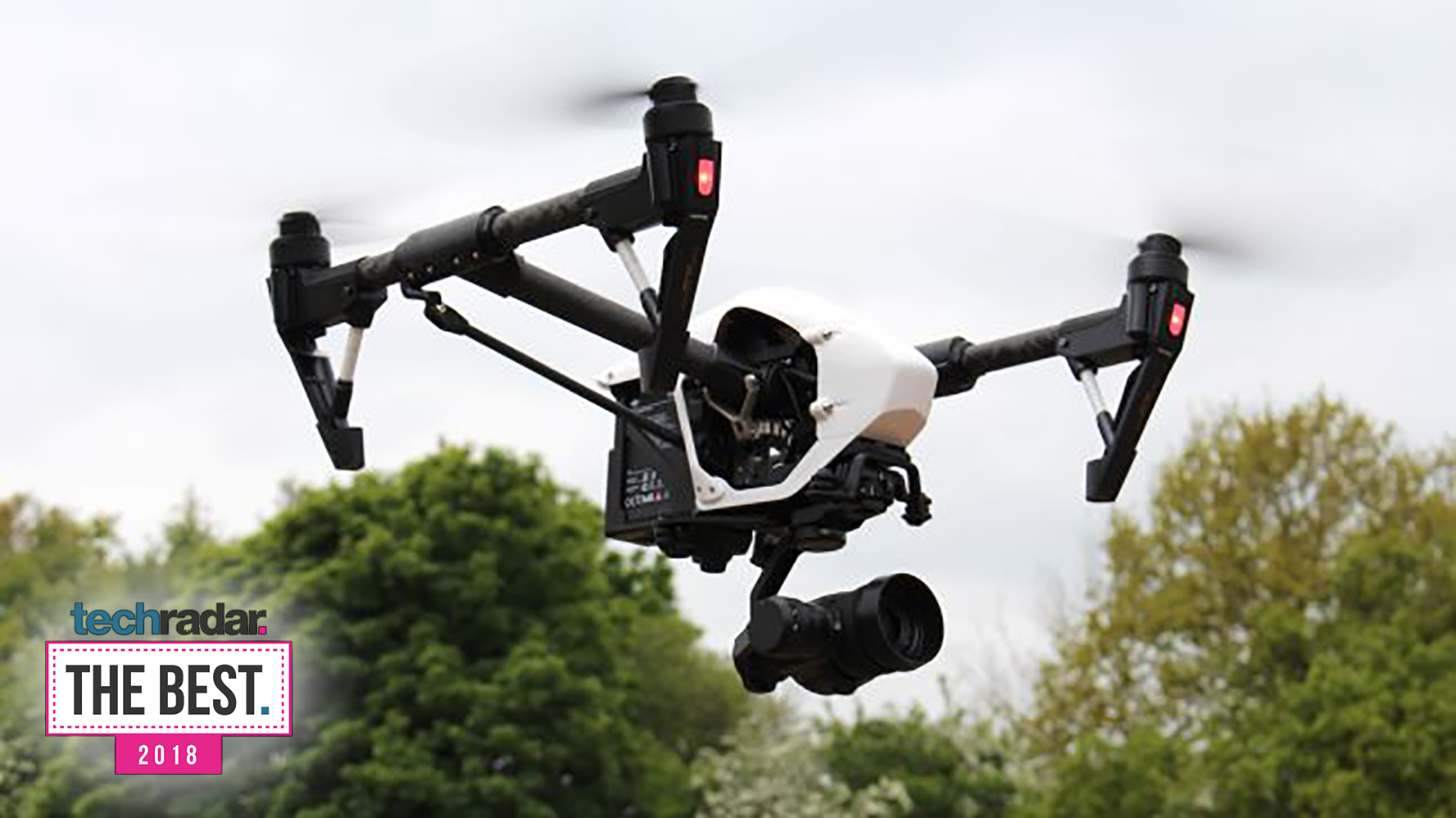 The DJI Inspire 1 may look like some kind of fearsome war-robot from the far future, but once you’ve gotten over its rather intimidating appearance it’s all too easy to fall in love with this agile and feature-rich device.

It comes with its own controller, which boasts amazing range (you’ll need to supply a monitor via your smartphone or tablet’s screen, though), and the camera – which is mounted on a gimbal for aiming – is upgradeable, so you don’t need to worry about your investment becoming obsolete after a few months.

Performance in the air is nothing short of exemplary, even in quite windy conditions. The DJI Inspire 1 is also incredibly swift and – when twinned with that excellent controller – easy to maneuver. It’s only shortcomings are its cost and the fact that the bundled battery only gives you around 15 to 20 minutes of flight time before it needs recharging. 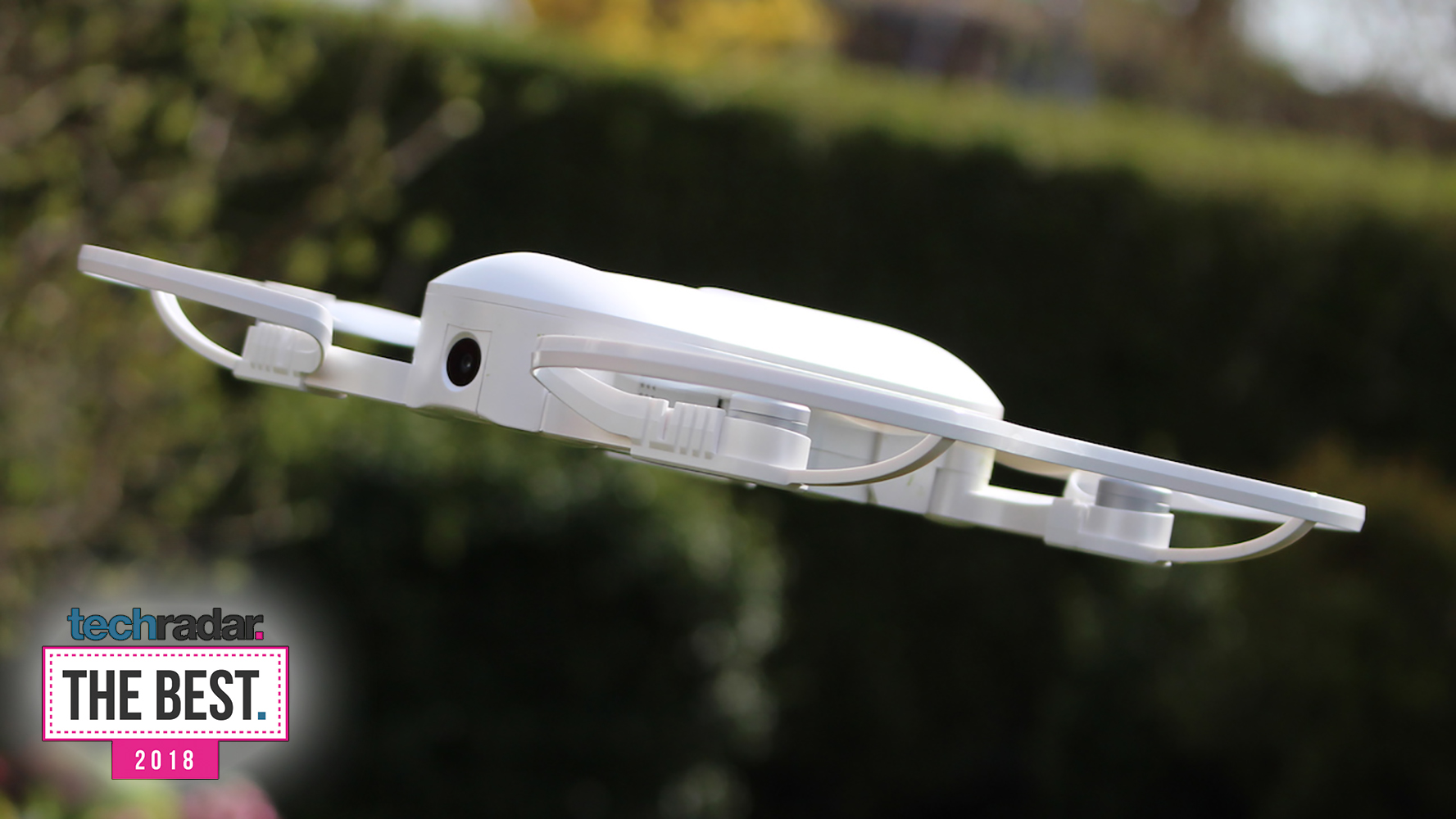