Looking for the best travel tripod you can buy? You’ve come to the right place. We’ve tested all of the latest models for giving your photography a rock-solid base without weighing you down with an awkward, full-size tripod.

Of course, you can’t really beat a full-sized tripod for truly solid support. The problem is that nobody likes lugging around a hefty tripod, so you’re likely to leave it at home where it’s no use whatsoever. The good news is that manufacturers are increasingly designing tripods that are relatively lightweight and fold down small enough to easily strap to a camera bag, or even fit inside one.

So-called travel tripods have been around for years but some are notoriously flimsy and short. That’s a fail on both counts, as they won’t give a sufficiently rigid platform for your camera, and the lack of loftiness can be a severely limiting factor when composing shots.

So how do you make a tripod that stands tall but folds down small? The traditional solution is to use four or five sections in each leg, rather than the more usual three. This gives greater telescopic reach when extending the legs. Some of the latest designs also include a dual-section extending centre column, for extra height.

The only real downsides are that a larger number of extending sections require the operation of more twist or flip locks, which can be a time-consuming chore. Each joint is also a potential weak point that can reduce rigidity, so careful design and manufacture are called for. Similarly, the larger the number of extending leg sections, the thinner the bottom sections will be. In some cases, they can end up being quite spindly and unduly prone to flexing.

A favorite trick that’s employed in the majority of recent travel tripod designs is swing-up legs. The idea is that to fold the tripod down, you first extend the centre column, then swing the legs fully upwards so that the feet encircle the head. This typically reduces the folded length by about 20cm.

In most cases, current travel tripods that complete with ball heads tend to weigh around 1.5kg, extend to a maximum operating height of around 150cm, and fold down to as little as 30-50cm. Aluminum and carbon fibre versions are often available but, because the tripods are quite small, the weight saved by using carbon fibre only tends to be about 200g or so, and they can be much pricier to buy. 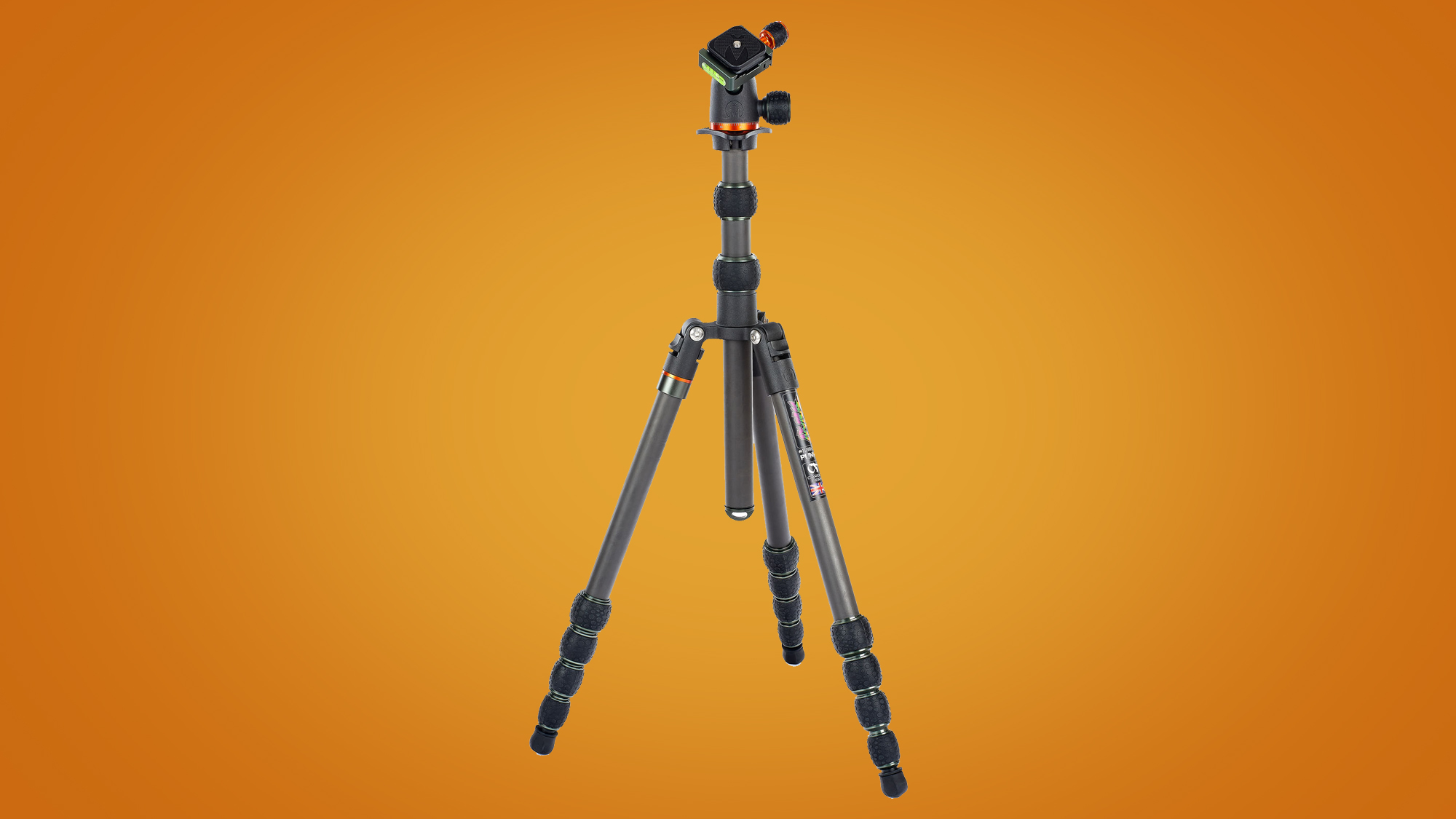 From innovative tripod designer 3 Legged Thing, the Punks range also includes the diminutive Corey, which folds down to just 35cm and has five leg sections plus a dual-section extending centre column. We prefer the Travis, though, as it has a loftier maximum operating height and with a single-piece centre column and four sections per leg, the thinnest sections are less spindly. Indeed, it has beefy maximum load rating of 18kg.

Typical of modern travel tripods, the legs swing up for stowage, reducing the folded length to 45cm. One of the legs can be unscrewed and used in conjunction with the detachable centre column to act as a monopod, with a maximum height of 171cm. Build quality is excellent throughout, extending to the AirHed Neo ball head which is included in the kit. A carbon fibre version of the tripod is available, going by the name of Billy, but it’s only 220g lighter in weight and considerably pricier to buy. 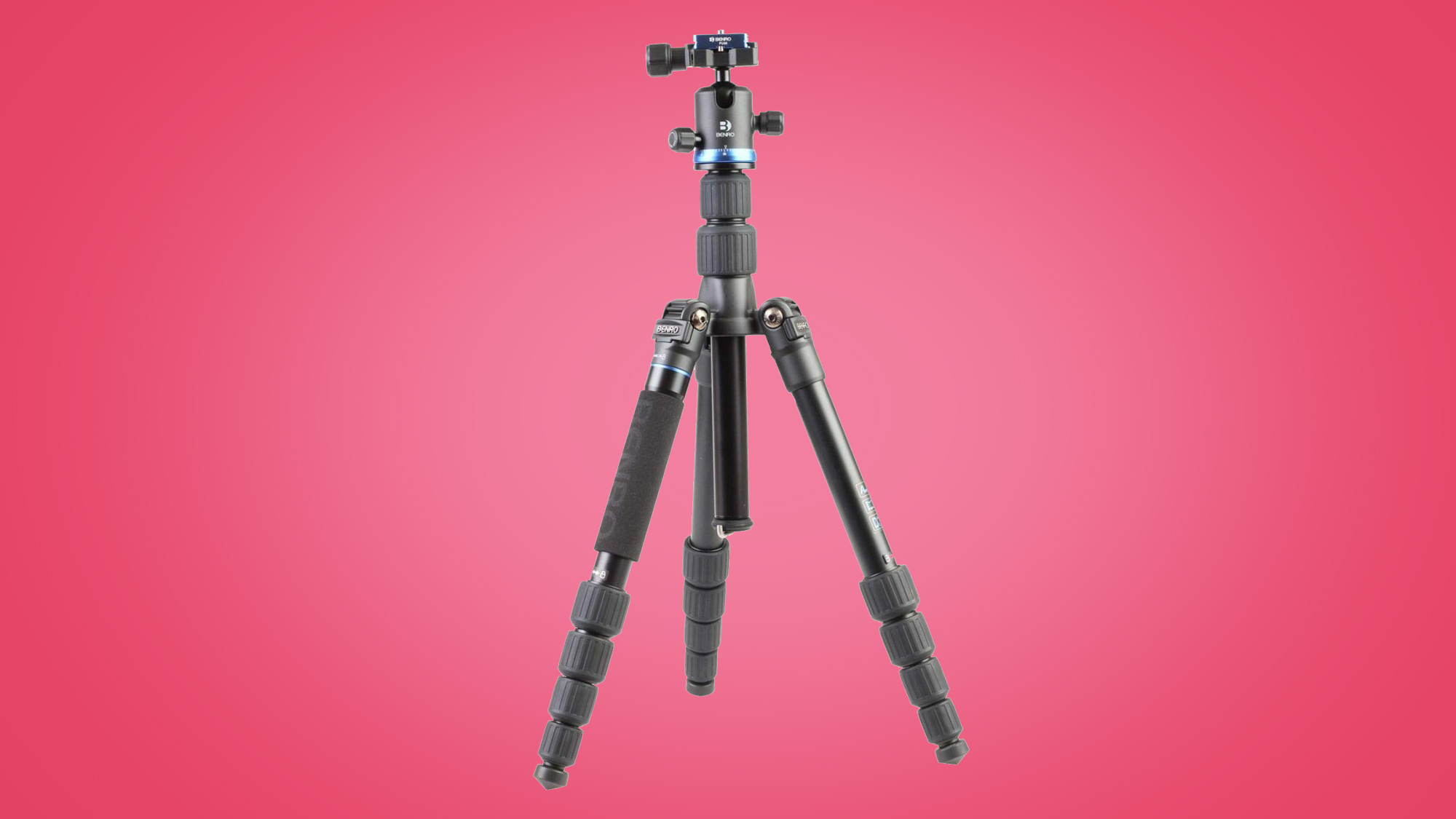 If you’re after a rigid, sturdy tripod that folds down really small and has a decent maximum operating height, this Benro ticks all of those boxes. It’s cleverly designed and beautifully engineered, incorporating five sections in each leg and a dual-section telescopic centre column. The leg with comfort padding can be unscrewed from the spider and used with the detachable centre column for monopod duty, with a maximum height of 152cm.

The ball head gives really solid support and includes an adjustable friction damper and pan-only release. There are no less than 14 twist clamps to operate when fully extending the legs and centre column, but rigidity remains very good even when using the tripod at full stretch. The aluminum edition is terrific value for money and the carbon fibre version is also competitively priced. 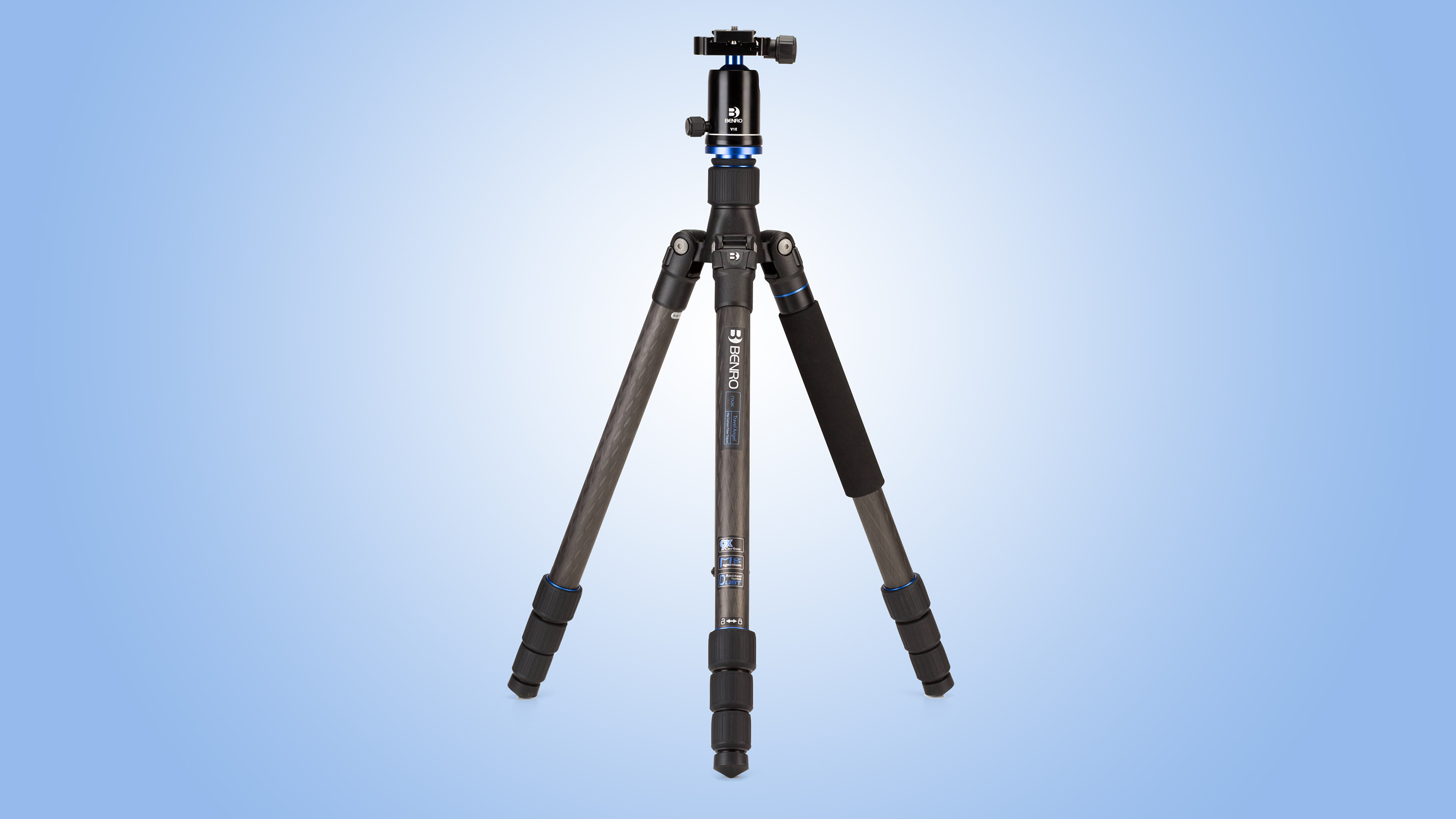 At 1.81kg, not even carbon fibre can stop this lining up alongside the FLM as the heaviest platform here, while the 47.5cm packed length also makes these the longest legs on test. But on the upside, the Travel Angel will raise your SLR higher than the competition, with the four-section legs and centre column extending to a lofty 170cm.

The nine-layer carbon construction results in a 10kg payload rating, and grippy twist-lock leg clamps, a sturdy ball head and a set of spiked feet are great to have. The Travel Angel’s stand-out feature is a removable leg that screws to the centre column to form a monopod. 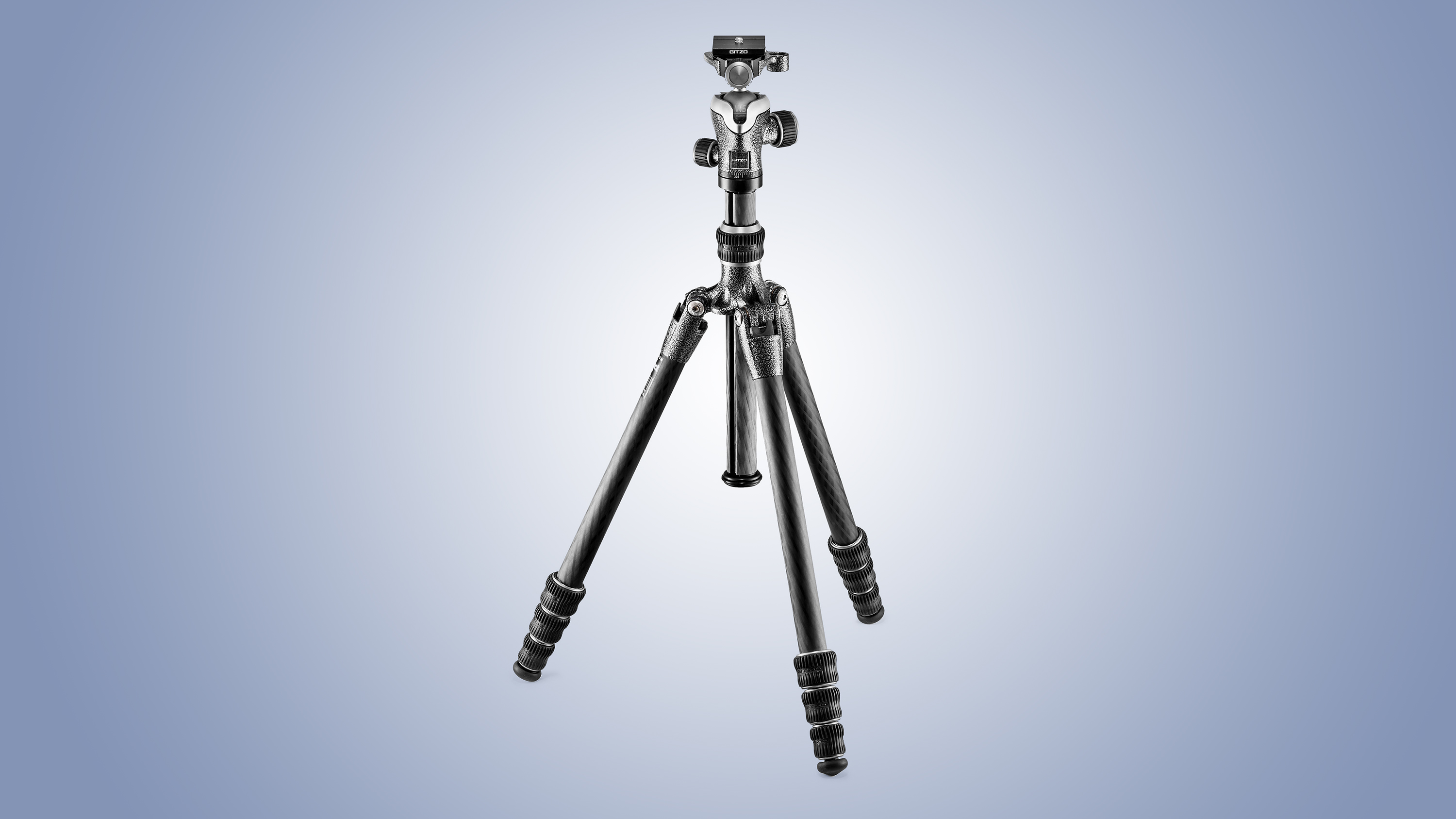 Despite the legs only extending to 133cm, this pays off when you’re on the go, as the 36.5cm closed length is the shortest here, and at 1.29kg only the Befree is lighter. Gitzo’s four-section Carbon eXact leg tubes manage to defy their slim diameter and stay amazingly stiff, making the 10kg payload rating entirely credible.

The quality and precision of the other components is just as uncompromising. The bundled ball head features separate pan locking, and its 32mm ball diameter is just about large enough to support a full-frame DSLR. 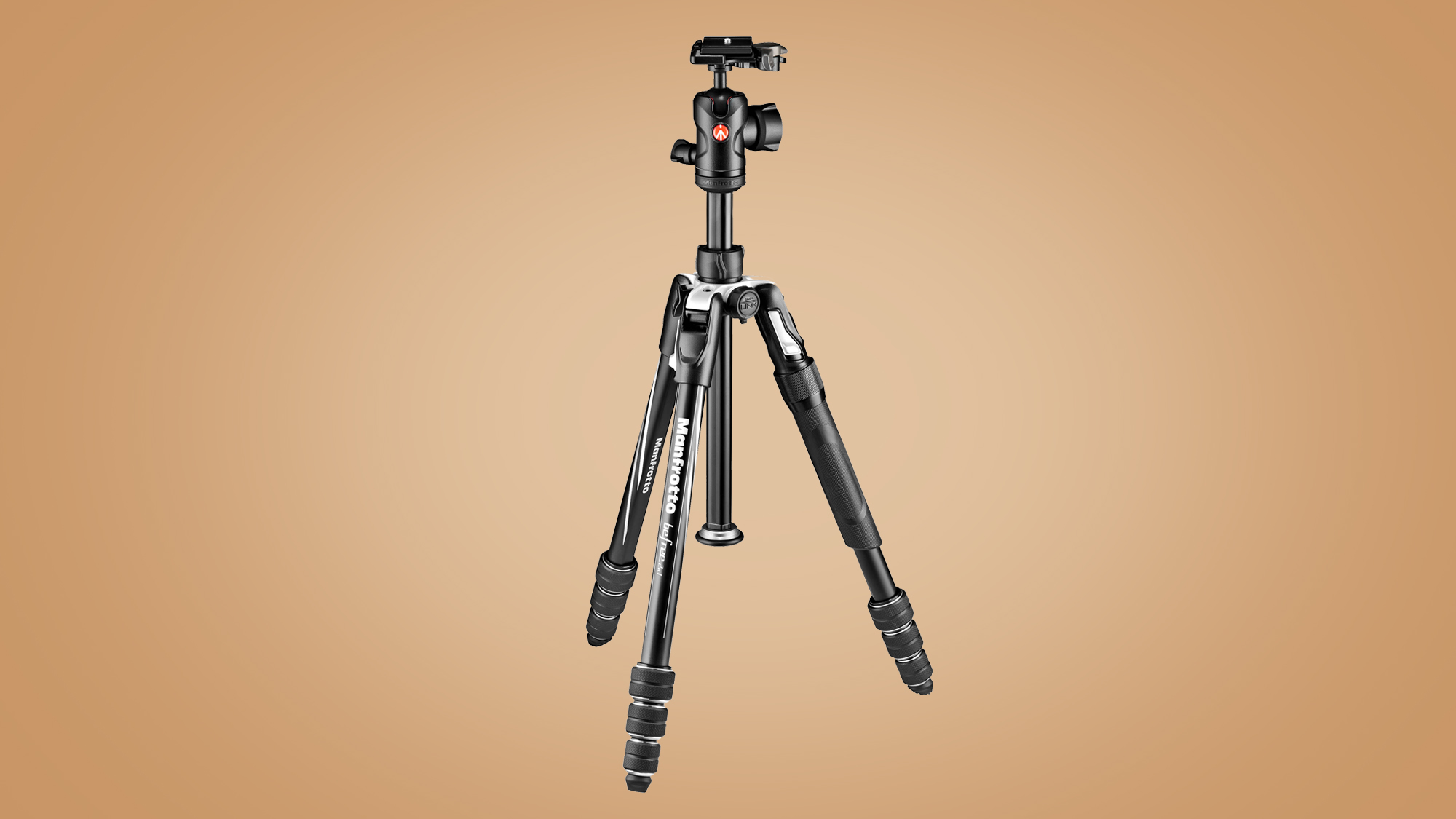 Manfrotto offers a wide selection of Befree travel tripods, in basic and advanced categories. The 2N1 is unique in the line-up, as it’s the only one in which a leg can be removed and used as a monopod, in conjunction with the centre column and ball head, giving a maximum operating height of 156cm. That’s 6cm taller than in regular tripod configuration, extending all of the four leg sections and the one-piece centre column.

The tripod caters to those with a particular preference for clip locks or twist locks, as it’s available with either. However, it’s only available in aluminum, with no carbon fibre option. For a bit on the side, there’s Manfrotto’s ‘Easy Link’ socket, which is useful for attaching accessories like an LED lamp. 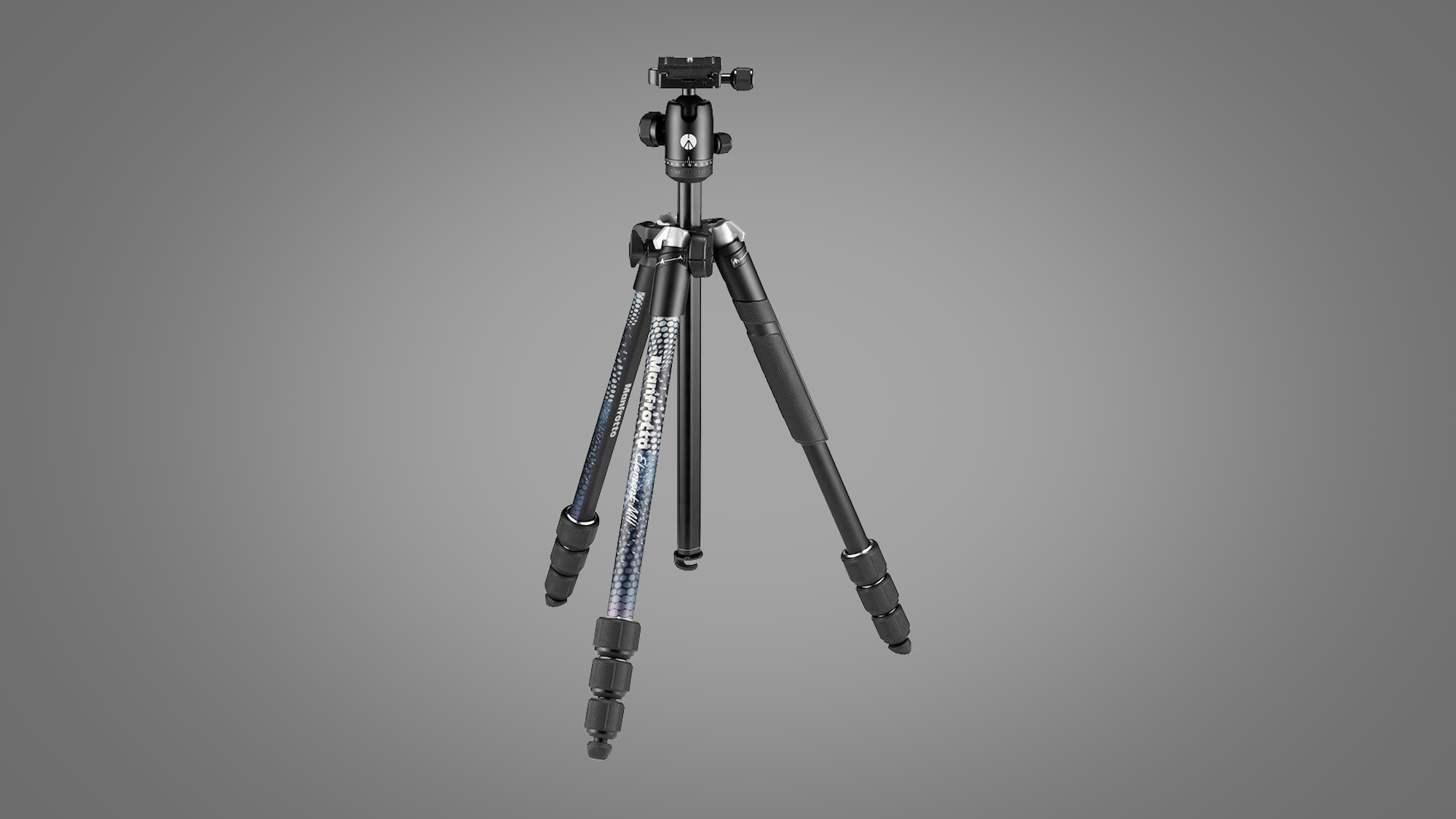 Manfrotto aims to spoil you for choice with its Element range of travel tripods, which are available in different sizes and colors. They’re also mostly available in either aluminum or carbon fibre, although the ‘MII’ which replaces the Element Big is so far only available in aluminum.

Fundamental changes from the Big include a reduction from five sections per leg to four, which make the tripod more rigid and quicker to set up. More remarkably, it does this with only 5cm loss in maximum operating height, and barely any greater folded length. A more disappointing change is that you can no longer remove one leg for monopod duty.

Typical of Manfrotto, the ball head works very well and is both quick and easy to operate, although it lacks an adjustable friction damper. The new kits have eye-catching graphics and are available in blue and red options, as well as more traditional black. 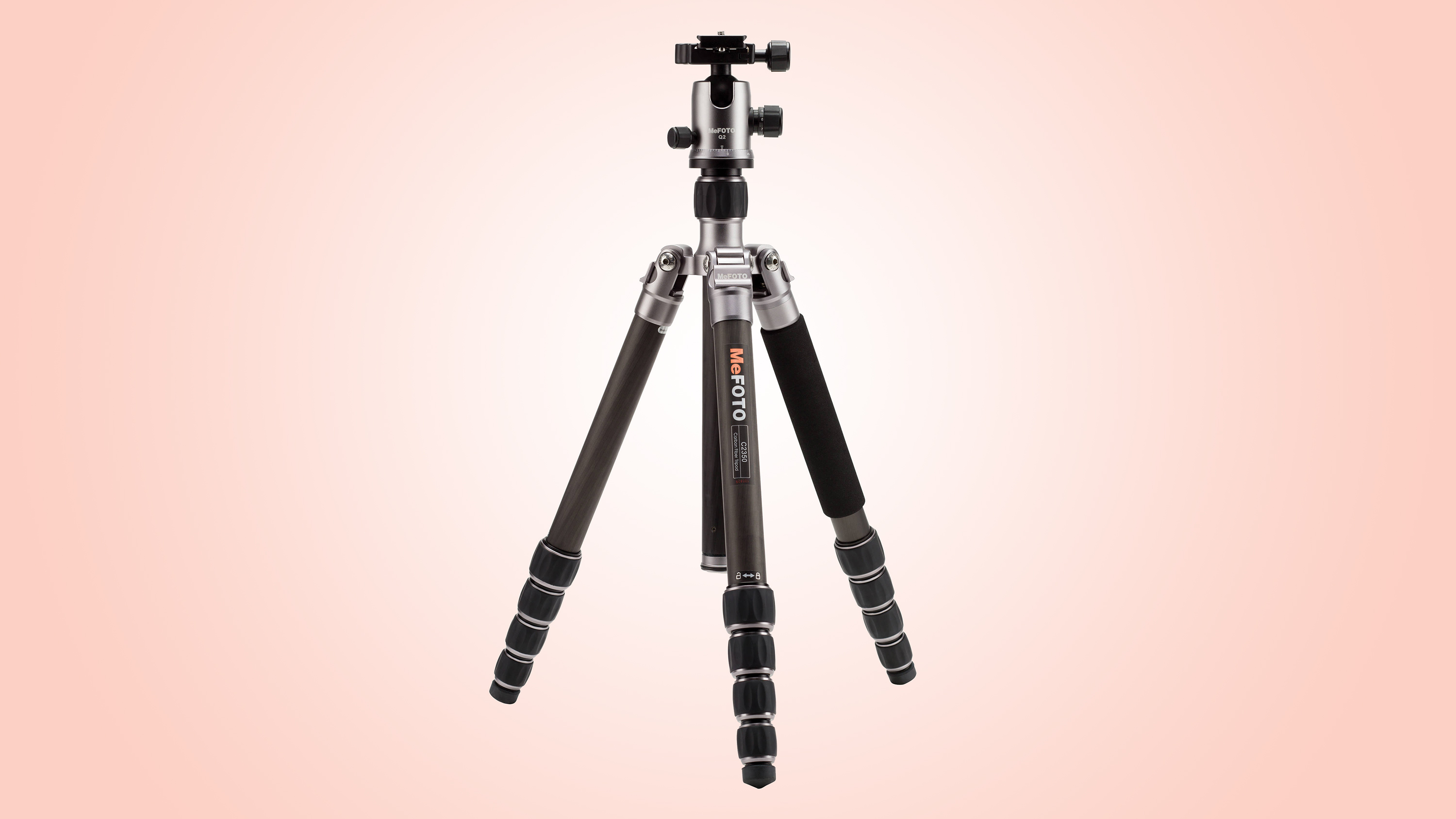 Fancy traveling in style? The GlobeTrotter will help you stand out: it’s available in red, green and blue finishes, as well as black or titanium. A 12kg capacity is enough to stand strong under all but the heaviest DSLR setup, yet the tripod tips the scales at just 1.68kg.

The GlobeTrotter’s measurements are just as well-balanced, with its 163cm reach retracting to a modest 42cm. Spiked feet and a capable ball head with adjustable friction enhance versatility. The monopod conversion feature is the same as the Benro’s (see above) – Benro is MeFoto’s parent company, which explains the GlobeTrotter’s top build quality.

What to look for in a travel tripod

Choosing a tripod isn’t just about selecting the smallest and lightest model. Indeed, picking the lightest legs isn’t always the best plan. Marginally heavier alternatives won’t be a noticeable burden, but they can provide much more rigidity and versatility.

Most of these tripods use a carbon fiber construction to save weight, but this ups the price. Some models also have aluminum counterparts. Each includes a compact ball head, but check carefully: a ball that’s too small for a larger DSLR will become a precarious balancing act.