Osman Sultan, Chief Executive Officer of EITC and du, said in his last interaction with the media on financial results after being at the helm for almost 14 years, that the operator will spend AED 1.5b this year for a full digitisation of its IT infrastructure, increased investment in fibre optic cable and rolling out more 5G base stations in the UAE.

“We are making the right investment in making a sustainable organisation for tomorrow’s needs and technological advancements. We are powering this through a digital strategy and optimising our operations,” he said.

The operator is going to roll out 5G indoor coverage soon but he said that it will take years to have full coverage of the UAE.

Sultan, who is being replaced by Johan Dennelind, chief executive of the network operator in Sweden and Finland Telia Group, in the first quarter of next year, said that Capex has increased by 82% year on year to AED 799m so far this year.

Du is covering 8% of the populated area of the UAE with 5G and expects to cover 15% by the end of the year.

“We expect to cover 100% of the UAE in the next three years. We expect 5G smartphones to overtake 4G by 2022,” Saleem Al Blooshi, Chief Technology Officer at EITC, told TechRadar Middle East recently.

Technically, he said that all the components for 5G are available but there are no business models.

“2020 will be the year for creating a demand for 5G. Based on the acceleration of the demand, the infrastructure rollout will also gain speed. By end of the year, there will be 800 base stations for 5G and it is expected to more than double by the end of next year,” he said.

Sultan said that all connectivity businesses have reached more than maturity and have to be managed by efficiency and change of business models such as digitising the factory by providing services.

However, he said that the one that is in the growth phase and hasn’t reached the maturity is end-to-end solutions on top of connectivity such as hosting, managed services for enterprises, security layer and security applications, cloud services [blockchain as a platform], infrastructure as a service and software as a service.

“Post-paid mobile market is still doing better and there is still some potential for us and we need to monetise the data better through data bundles. We continue to focus our efforts on attracting high-value post-paid mobile customers to improve the mix of our mobile subscriber base, leading to a 2.5% increase in mobile ARPU [average revenue per user] during the third quarter,” he said. 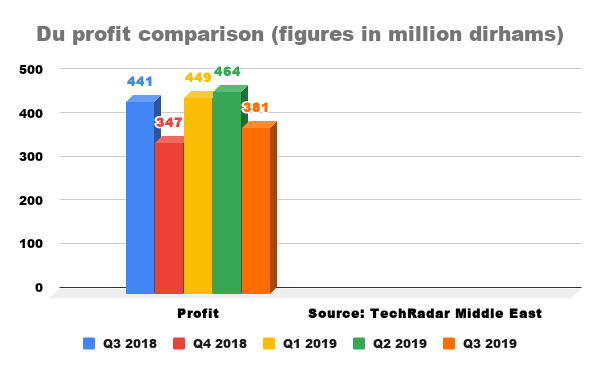 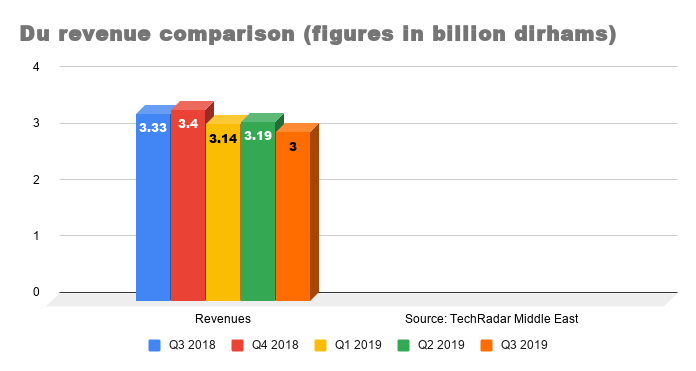 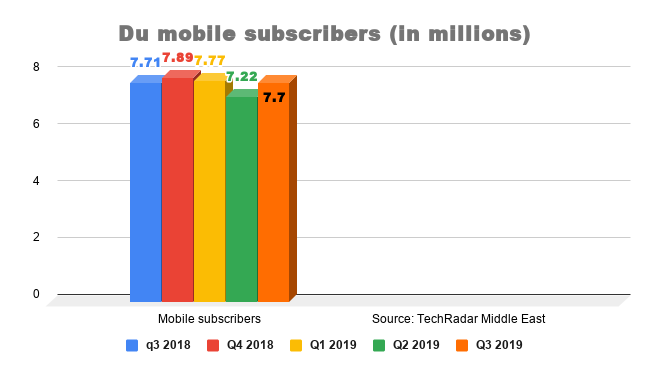 Du reported a 13.5% fall in third-quarter profit to AED 381m compared to AED 441m a year ago due to a big drop in the pre-paid mobile segment and overall mobile revenues.

Despite a 10.6% fall in mobile subscriber numbers from 8.65m to 7.74m in the third quarter and which also dragged down the mobile revenues by 9.8% to AED1.60b compared to AED 1.78b a year ago, the operator’s fixed-line business is showing growth for the last few quarters.

Sultan said that the operator will continue its transformation efforts to cope with a changing business paradigm and increase the efficiency of the business.

“We were able to achieve this result despite several challenges in our market where certain of our business lines which reached maturity are subject to pressure on their top line,” Sultan said.

Sukhdev Singh, vice-president at market research and analysis services provider Kantar AMRB, said that fixed-line revenue growth is expected as new communities and new projects in the emirate of Dubai are getting commissioned as a run-up to Expo 2020.

However, he said that it is amply clear that the market pressures and tough economic situation have impacted its mobile revenues.

He said that the local market will show signs of improvement over the next couple of quarters and which will help local telcos.

Given the kind of splendid growth du has gone through over the last decade, he said that local market is nearing saturation for existing services and constrained telecom performance in most of the region, it would be worthwhile for du to look at geographical expansion beyond the UAE.

However, he said that du has not given any indication of the same so far.