Stranger Things season 4 is official, and it’s in production now. Netflix renewed the hit sci-fi series for another season – although there’s no Stranger Things season 4 release date as yet. There is a first teaser trailer for the fourth season, though, which shows the return of Hopper, alive in Russia but not having the best time of things.

Could the fourth be the final season of Stranger Things? In an interview with Vulture, Ross Duffer hinted the series would be “a four-season thing and then out.” Series producer Shawn Levy clarified that “The truth is we’re definitely going four seasons and there’s very much the possibility of a fifth. Beyond that, it becomes I think very unlikely” (via Entertainment Weekly).

Originally intended to be anthology series, like American Horror Story, the popularity of Stranger Things’ cute child cast ensured that Netflix fans would get plenty more of the charming little scamps. Here’s everything we know about Stranger Things Season 4 so far, including its likely release date, cast and more.

To go along with the confirmation that Stranger Things season 4 is on the way, Netflix released a creepy teaser video that proclaims “we’re not in Hawkins anymore” – possibly referring either to the Upside Down realm or adventures further afield in the real world (Russia maybe?). As the teaser progresses, a sign saying “Welcome to Hawkins” is swamped by creatures from the Upside Down.

You can check out the teaser video below.

A new Stranger Things season 4 trailer was revealed to mark the beginning of production – and yes, Hopper is alive, in a Russian prison camp with a shaved head doing hard labor. The Duffer brothers issued a statement to clarify that, yes, that’s him and he’s still among the living.

“We’re excited to officially confirm that production on Stranger Things 4 is now underway – and even more excited to announce the return of Hopper!” they said. “Although it’s not all good news for our “American”; he is imprisoned far from home in the snowy wasteland of Kamchatka, where he will face dangers both human…and other. Meanwhile, back in the states, a new horror is beginning to surface, something long buried, something that connects everything…

“Season 4 is shaping up to be the biggest and most frightening season yet, and we cannot wait for everyone to see more. In the meantime – pray for the American.”

Stranger Things season 4 release date: when we expect it

The Duffer Brothers’ show tends to angle its release date around public holidays such as Halloween for Season 2, or the 4th of July for Season 3 – depending on the time of year within Stranger Things itself.

We wouldn’t rule out a Christmas edition, though we think a Spring season seems more likely – that is, if current plot threads end up leading the show’s story to the Chernobyl disaster, which occurred April 26, 1986, which isn’t long after the 1985 setting of Season 3. (Yes, this theory is from Reddit, but it’s pretty legit, okay?)

There tends to be 1-2 years lead time between each season, so we wouldn’t expect Season 4 to be released before late 2020 anyway, and an early 2021 release may be more likely. 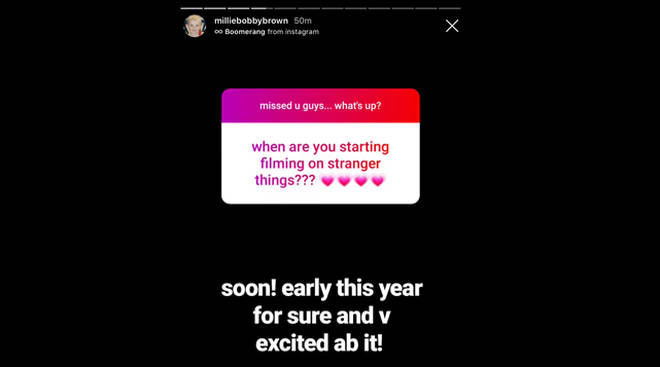 We also know that filming for Season 4 started filming in February 2020. When asked in an Instagram Q&A when shooting was to commence, Millie Bobby Brown (aka Eleven) confirmed that it was to be “early this year.”

However, filming will start in a new place before returning to the show’s normal home of Atlanta. According to Murphy’s Multiverse, first the team are setting off to Lithuania and shooting in and around where HBO shot their gripping smash hit, Chernobyl. That makes sense based on where we know Hopper is this season.

Despite the face Stranger Things has now been officially renewed, there are no official casting announcements, but you can be sure you’ll get a lot of the same faces as Season 3 – including Finn Wolfhard (Mike), Millie Bobby Brown (Eleven), Caleb McLaughlin (Lucas), Sadie Sink (Max), and Joe Keery (Steve Harrington). We don’t expect to see Keery in a sailor suit for the whole season again, but it was wonderful while it lasted.

Maya Hawke (Robin), a newcomer for Season 3, also quickly became a fan favorite, and will almost certainly be a big presence in the season to come – while Caleb’s younger sister Erica (played by Priah Ferguson) will likely continue to enjoy a larger role in the show.

Who won’t we be seeing? Spoilers ahead (obviously), but we don’t expect to see Dacre Montgomery (Billy) or Alec Utgoff (Alexei) again, though the showrunners could always surprise us. Heck, why don’t you bring back Barb while you’re at it?

David Harbour’s character is returning, too, as we now know from the teaser trailer.

With the Byers family moving out of Hawkins at the end of Season 3, it may be that series regulars Winona Ryder (Joyce) and Charlie Heaton (Jonathan) decided to back out from a further season, or will have smaller roles.

However, that’s probably not the case if we take Matt Duffer’s interview with Entertainment Weekly as gospel, in which he said: “I think the biggest thing that’s going to happen is it’s going to open up a little bit, not necessarily in terms of scale, in terms of special effects, but open up in terms of allowing plotlines into areas outside of Hawkins.”

Stranger Things season 4 could be split into two parts

WeGotThisCovered sources suggest that season 4 could be split in two. The rumor implies that, while there were rumblings that season 4 could be the last, its story will be continued as a second part: season 5. If this rumor bears fruit, it could well be down to the Duffer brothers wanting all the time they can to give the Hawkins kids the send-off they deserve.

The Stranger Things’ writers account has been teasing the title of Season 4, Episode 1: it’s called The Hellfire Club, which Marvel fans will know from the X-Men comics as a group of villains that includes Emma Frost. It’s possible this is just a working title, but hey, every little detail counts with this show.

Where can I watch Stranger Things season 4?

Stranger Things is one of Netflix’s hottest properties, and, like the previous seasons, Season 4 will almost certainly only be on the Netflix platform.

Netflix is a paid-for online streaming service for browsers, TV streaming devices, and mobile and tablets apps. Even the cheapest Basic Plan on Netflix offers access to the whole catalogue of titles for £5.99 / $8.99 / AU$9.99 a month. However, you’ll need the Premium Plan to watch the show in the highest video quality possible. You can see a breakdown of all the subscription options in our Netflix plans guide.

Will Stranger Things season 4 be in 4K / HDR?

If you’re interested in Stranger Things’ good looks as well – as you should be – you may be wondering what video formats the next season will be filmed in.

All three seasons so far have been filmed in 4K Ultra HD resolution, meaning anyone with a 4K TV and a strong enough internet connection will be able to watch in a huge amount of detail. Seasons 2-3 are also in HDR (high dynamic range), meaning an expanded range of colors and enhanced contrast – important for a show awash with bright colors, dazzling neon, and moody skies – though again you’ll need an HDR-compatible screen to make the most of it.

Netflix also uses the Dolby Vision HDR format, rather than the competing HDR10+ standard – we know this is a lot to think about with your next TV, but some only support one format over the other.