UPDATE: Samsung has made the Galaxy Z Flip official by revealing it in a commercial aired during the Academy Awards 2020 broadcast – watch the commercial here.

While it’s possible that this is the Fold 2 in all but name, it sounds very different to the Galaxy Fold, with a likely different, smaller form factor and a lower price. Plus, some sources specifically suggest that both are in the works, so we’re treating it as a different device.

Below then you’ll find all the news and rumors that specifically seem to be talking about the Galaxy Z Flip, along with those which could be talking about either phone. And make sure to check back here regularly, as we’ll update this article whenever we hear anything new.

Update: The Samsung Galaxy Z Flip name has been spotted on the website of Samsung itself, in a product listing for a protective case on the Romanian website. This makes us especially confident this’ll be the name of the new foldable phone.

The Samsung Galaxy Z Flip will probably be announced on February 11. That’s when Samsung is holding its big smartphone event for the first half of the year and where we’re expecting to see the Samsung Galaxy S20 range, so it’s an obvious candidate.

It’s also something we’ve heard from a leaker, who added that the phone would be available to buy from February 14.

However, that’s not the only possible announcement date. The Galaxy Z Flip could alternatively land at MWC 2020, which takes place at the end of February. That has also been put forward by a source, albeit in an earlier leak.

And yet another source has said to expect a new Samsung foldable in April, but this claim is older still. Further confusing matters is that some of these sources could be talking about the Samsung Galaxy Fold 2, as that will probably also land sometime this year.

With all that in mind, our best guess is February 11, as the most recent leak points to that date, and it’s also the only one to mention the Samsung Galaxy Z Flip by name.

It’s worth noting that these two leaks actually do line up, as Samsung typically charges around $100 more in US pricing than in pounds – so in reality if the Galaxy Z Flip costs £1,300 it will likely cost around $1,400.

We’re skeptical of the lowest of those prices, but the other options sound believable, as well as being similar. Any of those would make it cheaper than the $1,980 / £1,900 / AU$2,900 Samsung Galaxy Fold though, which makes sense, as the Z Flip is rumored to be a bit less of a flagship.

Recent leaks have given us our clearest look yet at the design of the Samsung Galaxy Z Flip: a succession of unofficial photos and videos mean that Samsung isn’t going to have much left to reveal on stage on February 11.

This hands-on video was posted to YouTube and shows the phone opening and closing shut along its clamshell hinge:

Before that, we had the short video below, again giving us a good idea of what to expect when the phone finally appears. You can see how the hinge works and the secondary display that’s on the back.

As you can see, the form factor when the screen is open is a lot like a typical smartphone, and when closed there’s a tiny secondary display visible. 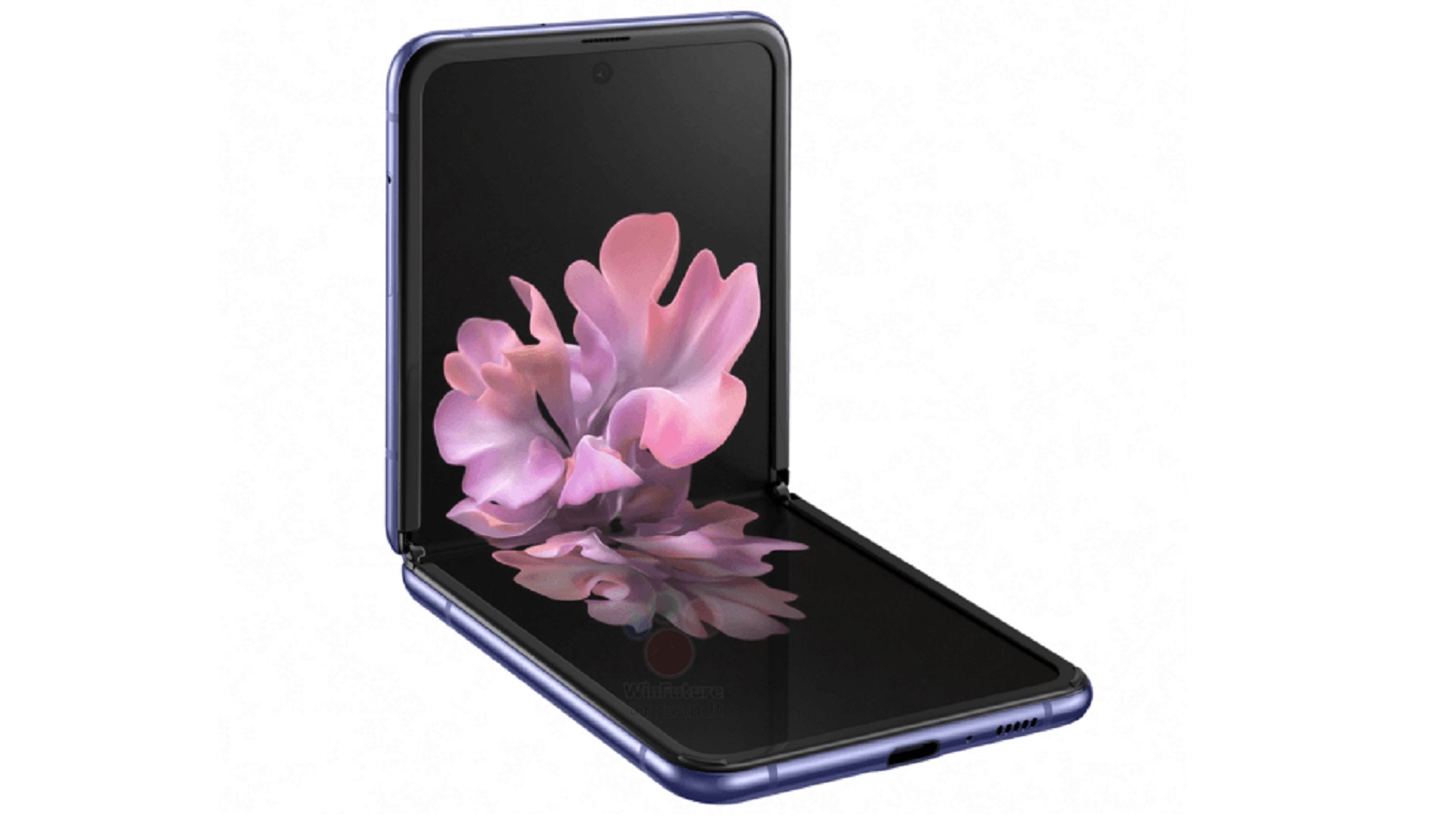 It’s a design that we’ve also seen in an image supposedly leaked from a Samsung presentation, though notably there the phone was referred to as the Samsung Galaxy Bloom, which is likely its code name.

For a long time we’ve been hearing that the phone will have a clamshell-like design, which would match the images above. New images submitted to Engadget show the same form factor in open and closed positions:

As for the screen, several sources have now said it’s a 6.7-inch one, which would make it smaller than the 7.3-inch Galaxy Fold. The most detailed of these leaks adds that the display has a 1,080 x 2,636 resolution and a 22:9 aspect ratio.

Another leak adds that it will have a Dynamic AMOLED screen and that there will be a fingerprint scanner on the side of the phone.

As with so much about the phone, some of the earlier leaks linked above refer to it as the Samsung Galaxy Fold 2, but we now believe they were talking about the Z Flip, as the leaks line up with recent leaks that mention the Galaxy Z Flip by name.

We’ve also heard multiple times that the Galaxy Z Flip will use ‘Ultra Thin Glass’, sometimes referred to as UTG. This could make the device slimmer, but is likely to have plastic layered over the top to make it more durable.

The phone is said to also have a small screen that’s visible when the main display is folded shut. This is apparently a 1.06-inch 116 x 300 one, so will probably mostly just be used for checking the time and notifications.

But you won’t be limited to just having the main screen open or closed, as you can apparently also lock it at 90 degrees, using the bottom half of the screen like a stand. You can see how this would apparently look in the tweet below.

The latest significant specs leak points to the Samsung Galaxy Z Flip having a Snapdragon 855 Plus chipset, 8GB of RAM, and 256GB of storage, with no microSD card slot, no 5G, and no 3.5mm headphone port.

The most notable thing there is that chipset, which while being one of the best in any phone at the time of writing, is likely to be superseded by the chipsets in most of the early 2020 flagships, including the Galaxy S20. So including it here marks the Galaxy Z Flip out as a slightly lower end phone, despite the inevitably high price.

That’s not totally unheard of though, as the Motorola Razr takes a similar approach. In fact, that phone’s chipset is positively mid-range. And while big name foldables are always likely to be expensive for now, using a lesser chipset can help keep the cost below astronomical levels.

Elsewhere we’ve heard that the Galaxy Z Flip might even just have a standard Snapdragon 855 chipset, rather than the Plus version. That seems less likely, but could reduce the price even further.

The only camera leaks that refer specifically to the Samsung Galaxy Z Flip state that it will have a dual-lens 12MP main camera, with both standard and wide-angle lenses, while the front camera might be a 10MP one.

Elsewhere we’ve heard mention of a 108MP sensor paired with a zoom lens, but that’s probably headed for the Samsung Galaxy Fold 2 if anything, since that’s likely to be more of a flagship.

As for the battery, that’s rumored to be 3,300mAh, which would put it on the small side. It apparently supports 15W charging, which is ‘fast’ but nowhere near as fast as some phones.

It’s also said to support wireless charging and reverse wireless charging. Most of this battery information comes from just one source though, so we’d take it with an extra helping of salt.