Emirates Integrated Telecommunications Company (EITC), the parent company of du, reported a 1.3% fall in full-year net profit to AED 1.73b compared to AED 1.75b in 2018 due to falling mobile prepaid revenues and subscribers.

The growth of fixed and ICT revenues absorbed partially the pressure on mobile prepaid revenues adversely impacted by pricing, competition and the negative impact on the base of the SIM registration disconnections.

Johan Dennelind, the new CEO of EITC, said that 2019 has been a year of a paradigm shift in the telecommunication industry in UAE.

“I note that EITC has been able to navigate in a changing environment, starting to pull growth levers in promising business lines, to protect its margins and profitability and to inject important capital towards the deployment and modernisation of its infrastructure,” he said in a statement.

Sukhdev Singh, vice-president at market research and analysis services provider Kantar AMRB, said that fixed-line revenue growth is expected as new communities and new projects in the emirate of Dubai are getting commissioned as a run-up to Expo 2020.

However, he said that it is amply clear that the market pressures and tough economic

He said that the local market will show signs of improvement over the next couple of quarters and which will help local telcos.

Given the kind of splendid growth du has gone through over the last decade, he said that local market is nearing saturation for existing services and constrained telecom performance in most of the region, it would be worthwhile for du to look at geographical expansion beyond the UAE. 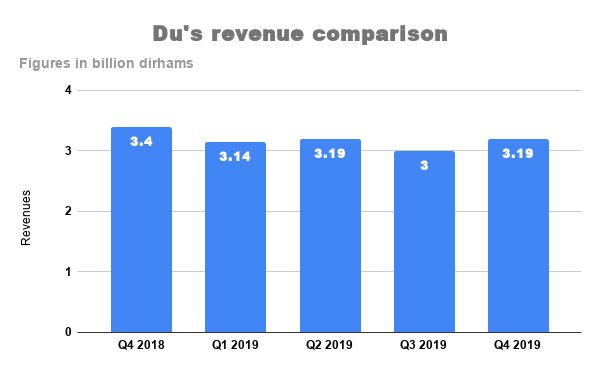 The telecom operator’s capital expenditure increased by 46.8% to AED 1.5b (or 12% of the revenues) reflecting continuation of the investment in 5G network rollout, fibre network expansion and IT modernisation and transformation initiatives.

The board has recommended to the shareholders a dividend distribution of 34 fils per share for the year 2019, out of which 13 fils per share have been already paid in August 2019 as an interim dividend.

EITC’s subscriber base continued its growth in the fixed segment reaching at the end of 2019, 219 thousand subscribers reflecting a 7.1% growth when compared to last year and stabilised its mobile base as the impact of SIM registration started in Q4 to fade away. EITC continued to focus on attracting high-value post-paid mobile customers, supporting annual ARPU growth of 4.3%.

Capital expenditure increased during the quarter to 709m (22% of the revenues).