Ready to raze some hell? Well, Doom Eternal is just months from release and we can’t wait to properly get our hands on the sequel to the much-loved 2016 reboot.

The new game looks even faster, more frenetic, and more gore-filled than its predecessor – and was meant to be hitting our screens in November. However, we now know that the Doom Eternal’s release date has been pushed back to March 20 2020, delaying the instant gratification only tearing through hordes of the undead with our bare hands can provide us. But from what we’ve seen and played of Doom Eternal, we think it will still be worth the wait.

It’s worth mentioning that March 20 release date only applies to the PS4 and Xbox One versions too – while a Nintendo Switch release is confirmed, it will be arriving some time after the other consoles.

Doom Eternal comes four years after the 2016 Doom reboot, and will feature the same unnamed marine (AKA the Doom Slayer) taking on the forces of hell – this time bringing the action to our own humble planet, and possibly even to heaven.

With a larger backdrop to the blood-fuelled action, and new online multiplayer modes confirmed for the game, there’s still plenty to be excited about, even if we have to wait a little longer to get our hands on it. Here’s everything we now about Doom Eternal.

[Update: We now have two more hours of Doom Eternal footage as well as the game’s file size. Read on to find out more.] 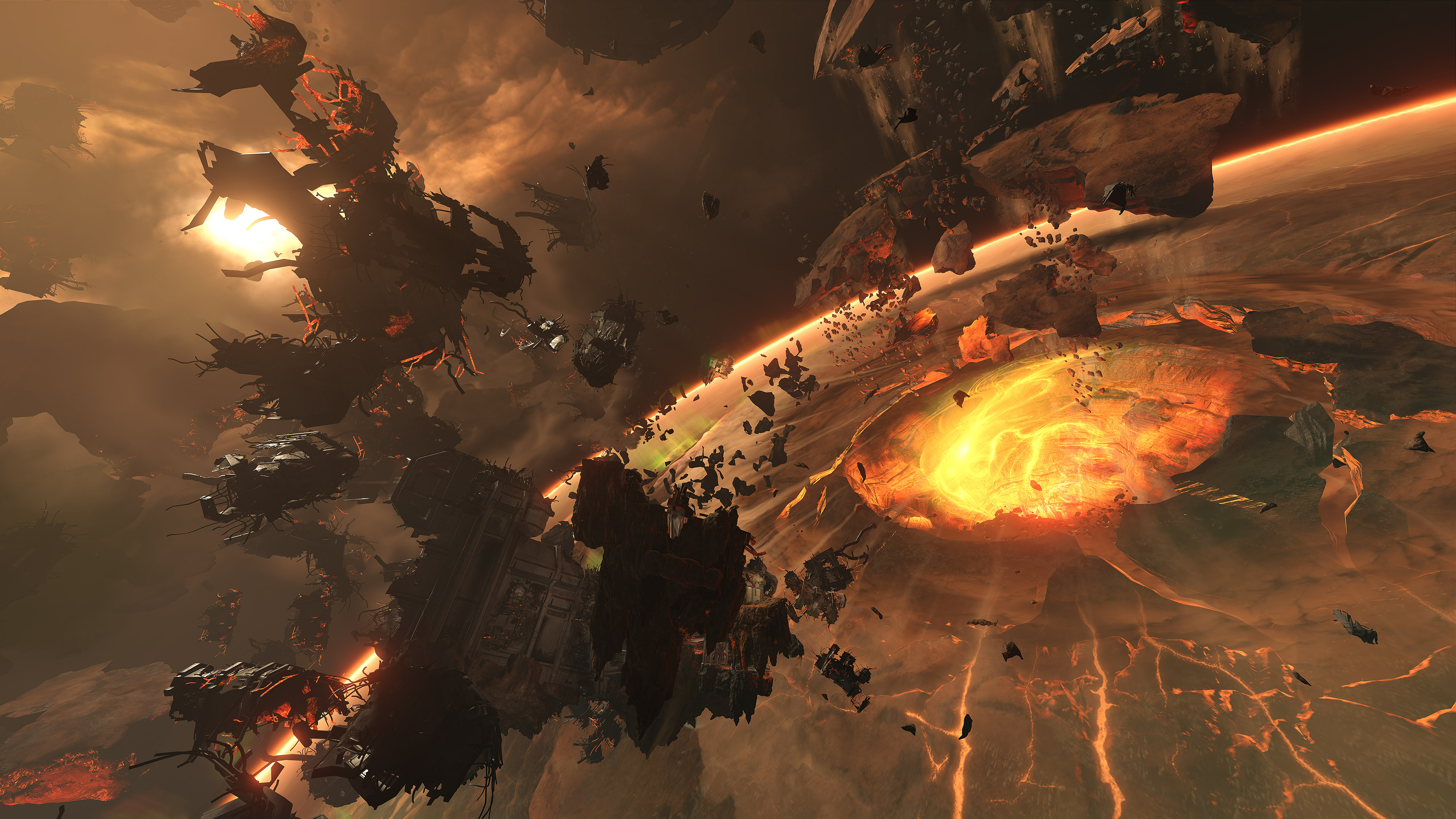 Doom Eternal will release on March 20, 2020 for PS4, Xbox One, Nintendo Switch, Google Stadia and PC. The game was initially due for release on November 22, 2019 but, back in October, it was announced that the release date had been pushed back.

A press release from id Software stressed that this was “to make sure we’re delivering the best experience – for DOOM Eternal to live up to our standards of speed and polish.”

If the most recent Doom Eternal trailer doesn’t sell you on the game then nothing will. It’s got a bit of everything that you would expect from the series: demons, guns blazing, a hint of narrative and a lot of gore.

Check it out below:

Check it out below:

Bethesda’s E3 2019 keynote included a big, bad trailer with even more incredible action, giving us a little more info on the story to come in Doom: Eternal. Y’know, so it’s not just guns and gore.

Bethesda also revealed Battle Mode, a 2-demons-vs-1-Doomguy versus mode for 3 players. Even if they don’t introduce a multiplayer mode, this is a neat little addition to shake up the carnage.

The Doom Eternal worldwide premiere gameplay reveal of Doom Eternal took place during the QuakeCon 2018 keynote, and was our first chance to see the sequel in action.

You can check out the gameplay trailer below:

Doom Eternal’s E3 2018 trailer had everything we love about the series, dialled up to 11. Get a glimpse of its apocalyptic vision of Earth, with a suitably thumping soundtrack and some jacked-up demons staring down the barrel of a shotgun.

The Microsoft Store page has been updated with Doom Eternal’s file size. On Xbox One the main game will take up 39.03 GB while its multiplayer element called Battle Mode is listed separately as being 38.74 GB. That’s a total file size of 61.21 GB.

While we wait for Doom Eternal’s release date, T-Pain has been playing it and broadcasting on Twitch. The rapper uploaded two hours of gameplay footage. There isn’t a whole lot that we haven’t seen before in the footage but, hey, it’s still fun to see the new mechanics at work.

More hands on
We got to play even more of Doom Eternal at a recent event and were hugely impressed. While we found the game to suffer from some glaring issues in previous hands-on sessions, we were able to really sink our teeth into Doom Eternal this time around.

id Software has clearly said that it doesn’t want Doom Eternal to be “mindless” and, while the general run and gun structure is there, there’s much more beneath the surface. Doom Eternal introduces some welcome RPG elements that take it beyond a simple shooter, we enjoyed the weapon customization options, exploration factors and the well-paced action. But for those who still want to shoot up some demons to metal, you won’t be disappointed.

We could tell you all about it, but you would rather see it right? Check out some epic gameplay from the event below:

Centred Weapons
When Doom Eternal launches in a few months, it will give players the option to play with centred weapons (via PCGamer). This classic weapon view, from a time before crosshairs and accurate aim with a mouse, was patched into the 2016 Doom after launch but Doom Eternal will have it in the options menu from the outset. It’s not an easy way to aim by any means but it holds nostalgic appeal for players who remember playing some of the earliest FPS titles, like the classic Doom games.

Campaign playtime
It certainly looks like we’ll get a good amount of demon-bashing out of Doom Eternal, with a rough playtime of “18-22 hours”, according to id Software executive producer Marty Stratton (via DualShockers).

Doom Eternal’s battle mode will have six unique maps at launch, each designed to allow the Doomslayer and demons to partake in a hellish game of cat and mouse. These arenas include portals, monkey bars and jump pads to make play as dynamic as possible – and fun obviously. 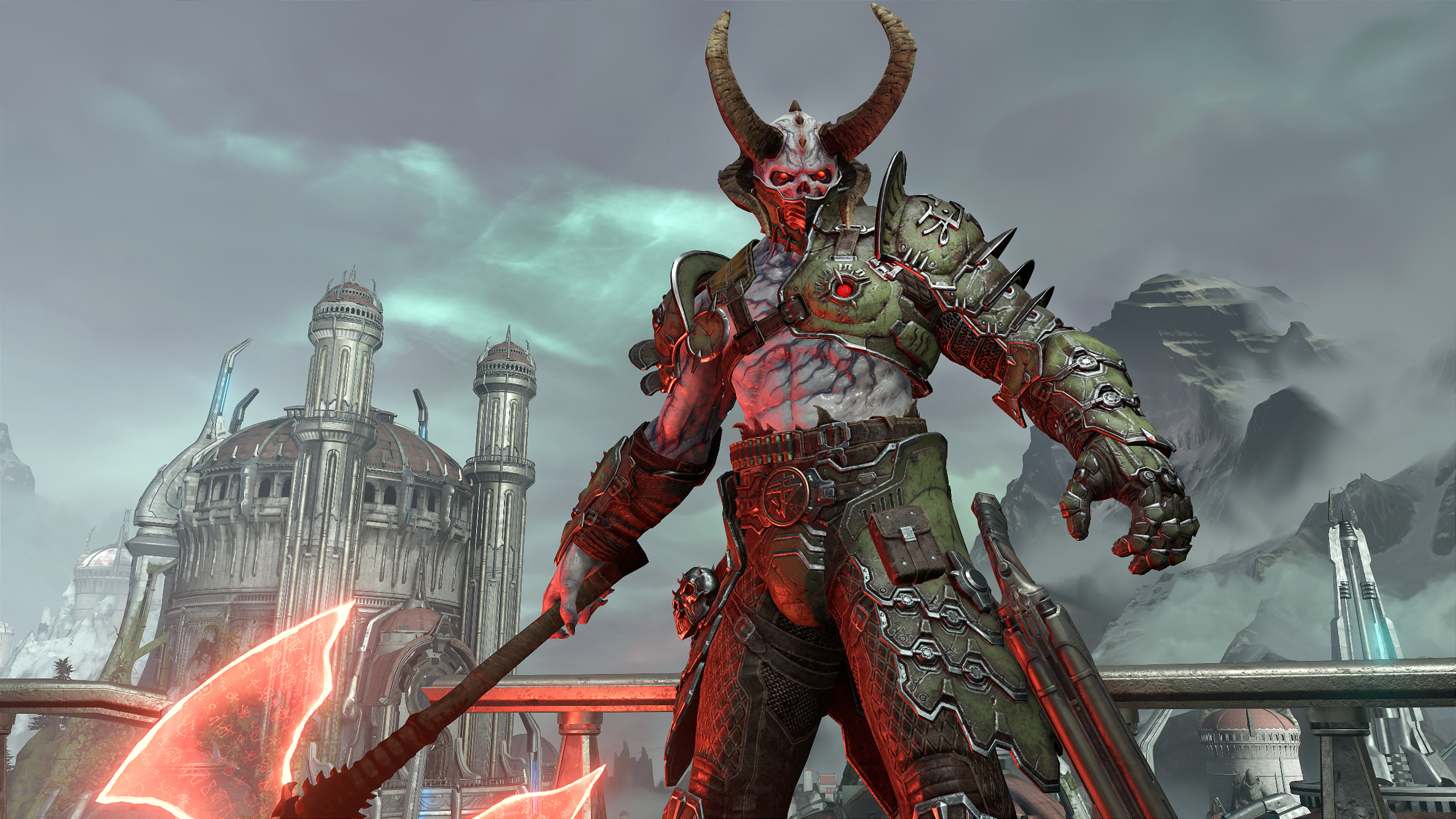 But what demons are available for you to play as? At launch, there will be five playable demons: the Revenant, Pain Elemental, Mancubus, Marauder and Arch-vile. Each demon has its own particular abilities, strengths and weaknesses to harness against the Doom Slayer. While some are more hard-hitting, others focus on stealth.

id Software emphasises that it’s important for the playable demons to work together to best the Doom Slayer, as a demon alone is an easy target for the BFG.

When it comes to the Doom Slayer themselves, you’ll be fully-loaded with all mods available. Like in the single-player campaign, you will need to manage spawning demons as well as resources – not to mention your player foes.

As the demons it is your job to kill the Doom Slayer to win, while the Doom Slayer has a harder task at hand. The Doom Slayer must kill both playable demons, but this is where it gets tricky: When you kill one demon, they have the chance to respawn after a certain amount of time if you don’t kill the other within that time limit. If a demon does respawn, it will do so with half health.

Between rounds, players will be able to upgrade their demons and Doom Slayer to make things a bit more difficult – like it wasn’t already,

From what we’ve seen, battle mode certainly looks like it will be a blast and we can’t wait to get our hands on it. 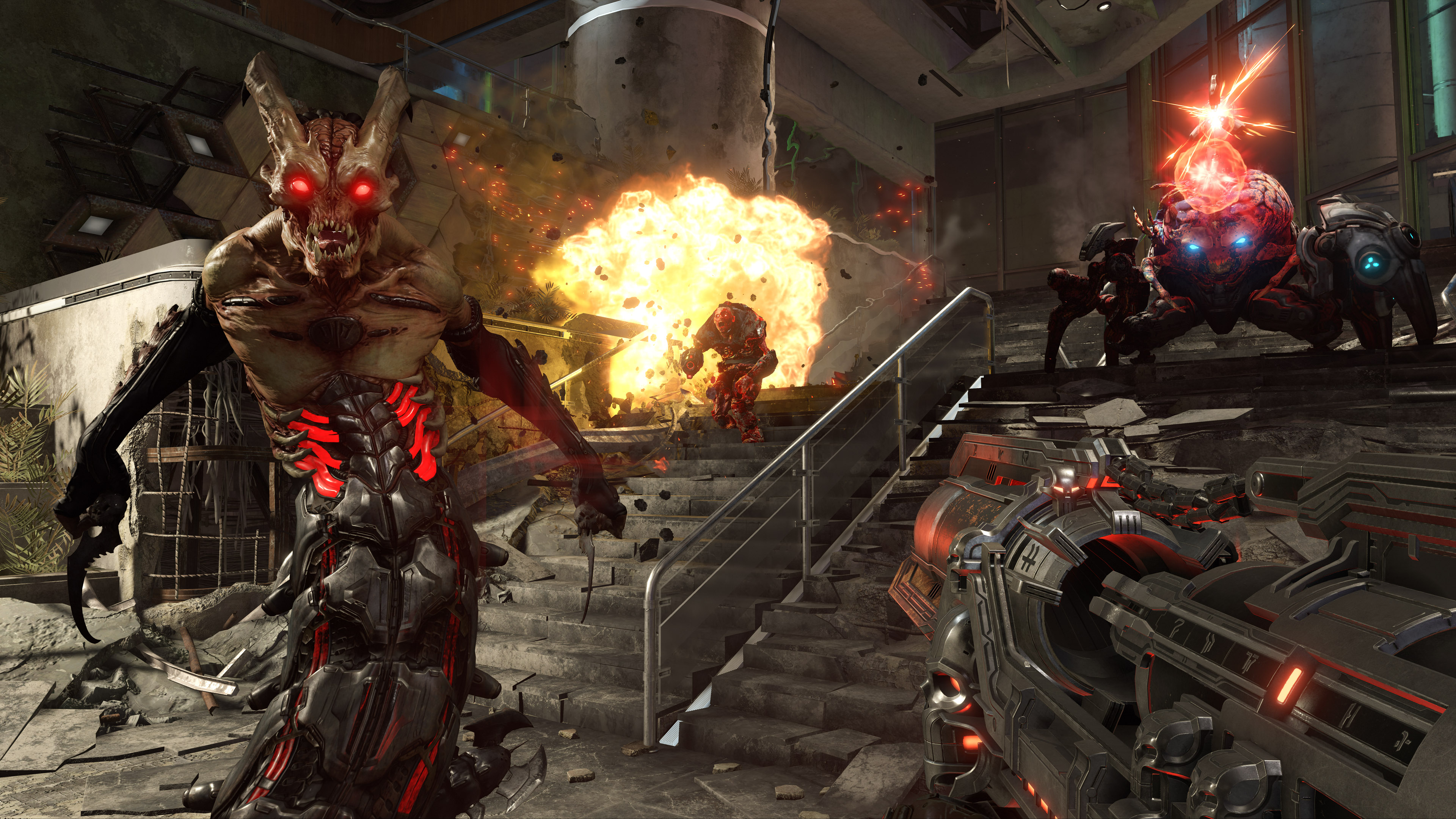 Stadia launch title
Google is entering the gaming fray via its new streaming service, Stadia, and it’s bringing Doom Eternal with it. The iD shooter will be a launch title for Google Stadia. It will allow you to stream the game at maximum PC gaming graphic quality levels in 4K resolution and at 60fps to any screen capable of running the Chrome browser, or connecting to a Chromecast dongle, with apparently little latency. It’s not yet certain how much it will cost to access Doom Eternal through Stadia, or when the service will launch beyond a vague 2020 window.

Slayer 2.0
The team has created the most powerful Doom Slayer we’ve seen yet, with enhanced armor and an arsenal of badass new equipment, including a shoulder-mounted cannon with flamethrower, an extendable blade, and a new dash ability. In addition there’s an upgraded selection of guns and mods to play with, such as the Super Shotgun’s new Meat Hook attachments which pulls you into the face of enemies.

A host of new demons (and returning favorites)
Doom Eternal will see the return of classic demons such as the Pain Elemental, Archvile and Arachnotron, alongside an array of brand-new demons like the Doom Hunter and the corrupted Marauders.

Invasion
An all-new Invasion mode allows other players to invade your campaign as a demon. Likewise, you can join the demon horde yourself and invade other players’ campaigns – either alone or as part of a hunting party.

Hands on
We were lucky enough to get hands on with Doom Eternal at Gamescom 2019 and Quakecon 2019. You make sure you check out our Doom Eternal impressions.

Or will we see a VR version?
The last Doom came to the HTC Vive and Playstation VR last year, albeit with some clunky navigation issues and a comparatively stripped-back three-hour story. The upcoming sequel is the perfect opportunity to build on that foundation and make a VR experience deserving of the legendary IP.

Coming to Switch
Seeing a bloodthirsty rampage like Doom Eternal on Nintendo’s family-friendly Switch seems like an odd match, but Bethesda has confirmed Doom Eternal will indeed be coming to the Nintendo Switch.

Keep checking back here for all the latest Doom Eternal news