If you’re on the hunt for a bigger television screen, you could do a lot worse than a 65-inch TV. You’ll need a decent amount of space in your living room to fit a 4K television of that size, of course, but if you have the room to spare, a 65-inch TV could be just the thing to take your home entertainment setup to the next level.

TV makers are going bigger and bigger every year; while 55-inch TVs are still the flagship, the market for 65-inch TVs is growing fast, with most sets these days being offered in both sizes, alongside even larger sizes.

Why go as big as 65 inches, we hear you say? Well, Most smart TVs nowadays will pack in 4K resolutions, while many feature color and contrast improvement with HDR (high dynamic range), and a 65-inch TV can help show off those enhancements in far more detail than a meagre 40-inch TV set. If you want to go even larger, you can also consider these 75-inch TVs – or make a real statement with the Samsung Q950R, which measures a whopping 98 inches.

The trouble is, getting a bigger screen can also just show off the imperfections in a TV’s processing even more clearly – which is why we’ve brought together the best 65-inch TVs in this handy guide, to make sure you won’t regret investing in a big-screen set. With the top picks from the likes of Samsung, Sony and LG, you know you’re getting the very best 65-inch 4K TVs out there.

The sets in this list give you a wealth of choice at the popular 65-inch TV size, but as we’ve said, sometimes a lot of choice gets confusing. That’s why we’re here to try and help you answer the question: which one is right for you?

Currently, our favorite 65-inch 4K TVs are LG’s series of OLED TVs, boasting exceptional black levels and premium HDR in the form of Dolby Vision. On the other hand, they aren’t the best option for brightly lit rooms.

If your living room’s ratio of windows to doors is too high, you might want to consider Samsung’s QLED TV series for your 65-inch 4K TV purchase instead. In comparison to the LG models, these are bright and colorful, and pack in technology that helps them cope with overly bright environments.

Of course, Sony TVs come with both OLED and LED panels, and you can’t go wrong with these either – so you really are spoilt for choice when it comes to picking out the best 65-inch TV set.

Don’t forget 60-inch TVs either – we haven’t highlighted any in particular in this list, but you still get a decent-sized set, all the benefits of a 4K resolution, and the usual set of smart TV features too. Oh, and they’re a little bit cheaper.

As you consider what you can afford, how bright your room is and where it’ll look best in your living room, let’s take a look at our favorite 65-inch 4K TVs right now. Each one in this list has been tested and approved by our expert team of reviewers, so you can make a well-informed decision.

The big question this year for 65-inch 4K TV buyers with money to spend is QLED or OLED? QLED is Samsung’s LCD-based screen tech, while LG makes not just the panels for its own OLED TVs but the other makers too.

An OLED like the OLED65C8 is hard to beat for a cinema-like environment. This 65-inch TV actually has much better contrast, and probably color, than your local cinema screen.

It uses WebOS software too, which just about the best smart TV interface out there in our humble opinion.

Cinematic images, smart software and slick design – what more could you want? Well, as you’re asking, Samsung’s QLED TVs are much brighter (which does wonders for HDR), and their motion handling is a little better too. However, for the image quality fundamentals of color and contrast, the LG OLED65C8 still wins in our opinion.

This TV is so high up our list for its practicality, though. It costs less than other OLEDs, or Samsung’s top QLED, which makes it our top choice.

Philips has significantly upgraded the picture processing power of its older TVs, and the benefits of this new-found brawn can be seen writ large, with enhanced contrast and spectacular colors.

The brand’s second generation P5 Perfect Processing Engine offers twice the picture processing power of the original, and that was a pretty impressive chip in its own right.

The effectiveness of Philips second generation P5 picture engine may sometimes be subtle with real-world content, but it gives this 65-inch TV set an edge when it comes to playing 4K or HD in SDR.

Buyers should weigh the visual benefits against the minor irritations, like poor catch-up TV provision, just two full-spec UHD HDMI inputs, and the lack of Dolby Vision. The Philips Hue-compatible Ambilight room lighting system, and the promise of an early Android TV updates, however, might just balance the books.

With a competitive price point for the technology on offer, the 803 is arguably Philips most compelling OLED proposition to date.

As the top model in Samsung’s QLED range – 8K models like the Q950R aside – the Q90 offers a truly dynamic picture with market-leading picture processing and incredible HDR images. Not to mention a dazzling peak brightness of 1,600 nits (double that of most OLEDs). And with a sleek, bezel-less design, and the OneConnect box to tidy away all your cables, the Q90 is as nice to look at when the TV is off as well.

But one of the most impressive innovations with the Q90 is the viewing angles: something that LCD panels traditionally struggle with, given that backlighting usually faces directly forwards. Samsung has tackled the problem admirably, with its Ultra Viewing Angle technology meaning that contrast and color are as strong off-axis as they are head-on, correcting one of our main complaints for the Q9FN.

Add to that the built-in Bixby voice assistant and comprehensive smart platform, and you have a top-class television full able to compete with the OLED TVs out there.

Few televisions released this year have quite the swagger of the Panasonic GZ2000 4K OLED. Sitting at the very top of Panasonic’s 2019 TV range, this flagship TV offers the best of the company’s HCX Pro Intelligent processing, with a custom-made OLED panel to distinguish it from the cheaper Panasonic GZ1500 and GZ950 / GZ1000 models.

That’s not to mention the broad HDR format support Panasonic has introduced across its mid-range and high-end sets. However, it’s the GZ2000 that should really show off these formats at their best.

Another standout feature is the 140W Dolby Atmos speaker system, involving both a built-in soundbar and upward-firing speakers, with incredibly precise audio location across the screen – meaning you’re getting both precision and power from your television’s drivers.

You won’t find this one in the US, despite its popularity among professional Hollywood colorists.

LG’S OLED 65E9 doesn’t stray too far from the C Series model listed above, though the design is a bit more ambitious, with a gorgeous bezel-less glass panel that appears to simply float above the TV stand.

You’re getting an equivalent picture and 2nd-gen a9 processor, and in terms of getting bang for your buck, the C Series is generally the better option. But for those wanting something with the wow factor – even when you’re not watching anything on it – and a boosted audio system packed in, the E9 is certainly the premium option.

There are nowadays a handful of choices if you want a 65-inch OLED TV. Sony, Panasonic and LG all make them, and each offers multiple options.

The 65-inch Sony KD-65AF9 is one of the best, too. Sony has some terrific upscaling algorithms at play, meaning even those HD/SDR images get the cinematic treatment on this 4K set – often more so than LG’s own panels. The new X1 Ultimate processor clearly helps with picture processing, with the vivid color and flawless contrast expected of a top-class OLED.

The AF9 struggled with a frustrating smart platform, but its successor’s Android Oreo interface is simpler, stripped back, and much faster to load too.

Sony still insists on a lean-back design that works better on paper than it does on practice, but it’s a small complaint for one of the year’s best OLEDs. Just stay clear of the Netflix Calibrated Mode: as it stands it tends to harm rather than help the picture.

The Sony XBR-65X900F brings a number of improvements over earlier models from Sony, including greater brightness, which improves HDR performance, and even better motion handling. In fact, we doubt you’ll find smoother motion handling on any other set.

Image quality is also fantastic, with great black depth and insight – even SD content looks good. As this is an LCD you don’t quite get the perfect blacks of OLED, but it gets as close as LCD can.

Like previous Sonys, the Sony XBR-65X900F uses Android TV, which can be frustrating at times. However, it does give you access to masses of apps, games and streaming services. Sound quality has improved too, although this TV’s speakers won’t, of course, make an action movie’s explosions shake your floorboards. 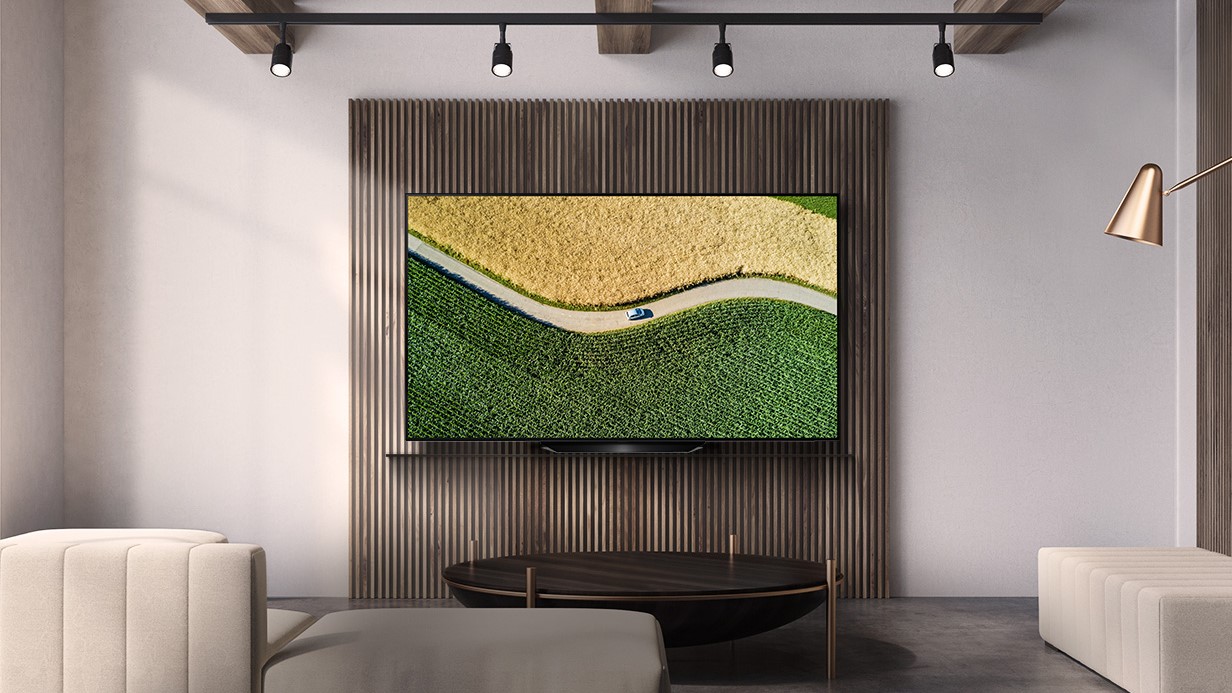 Want an OLED TV experience without the price tag? The LG B9 OLED may be the television for you.

Sitting at the bottom of LG’s OLED range, the comparatively budget set forgoes the a9 Gen 2 processor of its more expensive siblings (like the C9) for a simpler a7 Gen 2 model.

You have to be careful going for the cheapest OLED TVs out there, as some simply don’t get the balance between bargain and baseline quality. The LG B9, though, still manages to achieve a dynamic picture with the infinite contrast and vibrant colors in keeping with the rest of the range – even if some mild video noise creeps into the darker sections of the screen.

Overall, though, its low starting price (for the 55-inch model) makes it the best ‘budget’ OLED out there.

There’s no doubt in our minds – the TCL P6-Series was hands down the best budget TV of last year. But, if there was a downside to last year’s models, one that could’ve and should’ve been fixed by year’s end, it was the fact that the TVs were limited to one size – a paltry 55-inch screen. Worse, production couldn’t keep up with the heavy demand once word got out how spectacular those TVs were.

Thankfully that’s all changed this year and the TCL 6-Series is now available in a gorgeous, affordable 65-inch TV size that not only looks phenomenal, but goes easy on your wallet as well for a 4K screen.

Hisense is a TV brand known for bringing some real budget prices to even some of the biggest screens, and the U8B proves it. Sold only in the UK, this edge-lit 65-inch 4K TV bundles a host of different patented technologies that make up Hisense’s ULED panels – essentially a jacked-out LED display, rather than a different type of technology altogether.

Why so cheap? The edge lighting won’t make for the most consistent brightness across the screen – compared to a full array backlight – but it does keep the panel wonderfully thin. With a silver trim and imposing stand, too, this is a television designed to have an impact.

The Hisense U8B ULED has a clean and straightforward UI, through its Vidaa U smart platform, with plenty of streaming and catch-up apps – including FreeView Play. With Dolby Vision and Dolby Atmos, there’s plenty of premium format support too – though sadly not HDR10+.

You won’t get quite the picture quality of other entries on this list, but it’s not quite a straggler, either. This is a fully-fledged 4K panel, with crisp images and decent motion handling – even if the edge-lighting and dimming zones can lead to blooming around bright areas of the screen. For the price, definitely a 65-inch TV to consider.